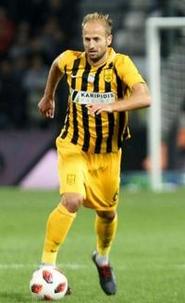 I suggest to raise LPA and LPS at greens

There's no need to make a change since he still didn't choose to play with Albanian NT, and I think he'll stick to the swiss one.
Top

he cannot play for the moment,cause he played with Swiss u21 once, he refused Swiss NT twice,he want to play for Albania...
Top

He was awarded Albanian citizenship, but I'd still keep his football nationality to Swiss until he's called up for the Albanian NT and makes his international debut for them.
"Willy Wanda is Chinese!!!"
Top

Epsi,have you ever seen this guy playing?His EP is sure higher than this,for me at yellows,very agile .SPA should go up maybe 2 points,his passes are very nice,he is a playmaker at NT.His BC is sure higher than this,he have close control of the ball,good technique . And 2-3 point more in ATT . Sure Basha is Att>Def ,he have very good vision for the game .
PMTP & Mia San Mia
Top

Hasn't played a single game since 13 April 2014 because he is injured so sure his IT should be C now . Can't say anything about stats cause the last time i saw him playing was 5 March 2014 in a friendly against Malta when he scored a header

He needs an update . In the last 2 years he had some injuries and also has been out of form , played just 3-4 full matches

.
For sure his FORM should be 4 and IT C . About stats , he is a decent header so for me HEA can be 72 . He never takes free kicks just sometimes the corners so i don't think that he needs more than 62 in FKA . EP , TS and DS should go down to 74 cause with age and with his injuries he has became slower . STA also should come down to 82 for now and SPA can go up to 76 seeing that he isn't a bad passer and also *Tactical Dribble should be removed

This season Basha has become very important in the midfield of both Bari and Albanian NT . His experience helps the team a lot . Except the foul against Belotti ( still his only problem are the fouls that he makes

) , he made a very good match against Italy ( together with Memushaj ) , where he showed as always very good technical abilities , made some decent long balls and was also very important in defensive phase .
Talking about the set , i still think that his LPA , BC and TW are a bit underrated for what he shows IMO . His supporting moves are very good , is always ready for a pass , shows always a decent ball control with both legs and chest and also his long passes are good but not dangerous enough , to deserve a much higher value , so those abilities can have just some small tweaks

. Also , i think that Basha should have *Anchor Man to represent his style of play

Updated. He plays like the more offensive minded half of the double pivot with Matilla. He most often provides the first option for a pass for the defenders and attempts to move the ball forward and he does this competently. He's more than a build up player though as he can be really direct and quick-minded about picking out a good long or short pass from distance creating a fast attacking transition. He is the team's midfield engine at the moment and he remains there for the most part, not the B2B 3/3 awareness player.
Top
Post Reply
18 posts • Page 1 of 1