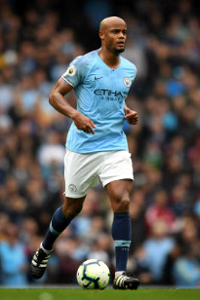 How much money is it now, 210m to get a cb to work well with kompany? And it's failed over and over again. 32, repeatdly injured and hes still completly irreplaceable for city. The differnce between him and every single one of citys is like the differnce between an amature and professional. Hes just an absolute monster and came back just as good as he went out. Seeing the contrast between him and otamendi is insightful for just how good he is. Otamendi is a beast of a defender, but hes just a tactical mess. Kompany has alot of what he has, but hes better at everything that makes otamendi good, and then hes smart and tactically excellent.
Top

the thing that stood out to me watching city when he came back, is that, otamendi and stones are very good passers for centrebacks, especially stones. but kompany is right there with them, he doesn't lag behind almost in any way AT ALL- he is a superb long passer and has excellent technique. that was obvious already in his prime with mancini, but he fit right back into the team and didn't skip a beat in spreading the ball around the way pep demands, and i didn'y expect him to be so influential so immediately again, but he is.

and he is such a great tackler, and so strong on top of all that. the only concerning thing about kompany is that any time he needs to slow down or turn suddenly, you feel like he'll injure himself again

which is not unreasonable considering his injury history unfortunately. i actually do sympathize with pep not using him much this season, it would be disaster to have another puyol situation due to coming back from injury too early. i felt the same about ousmane at barca, yeah he would've helped against roma.. but if he needs more time you can't rush him without risking to ruin the next few years of his prime. players are brought back from injury way too early way too often and it regularly leads to the rapid and often irreversible decline of a player.
If you don't put effort into your post, i won't put effort in my response.
Top


But can anyone explain to me how his weak foot frequency isn't a 1? Lol who gives him a 5? Have you seen him play?
Top

Looking at the ladders I see that Kompany is rated as the 6th strongest active player in the world. I can't say strength is what I've always thought was Kompany's biggest strength. He was a phenomenal defender in terms of reading of play, never seen him as a powerhouse. Victor Wanyama, Moussa Sissoko, Lukaku, Dier I'd all rank as more physical.
Top

Dier is an absolute no.

Mauro Silva was a monster, but rarely initiated via his strength.

But you knew not to cross him. And when you did, he only had to hold his own, and you'd be floored.

Kompany is one of the strongest players in the world.


His weak foot frequency is a 1 tho. Who is watching him? He's on the right and runs farther across on his right, and regardless of how he's running, where the ball is and how it's coming, he'll 1 touch play it (should have 1 touch), with his right.

At times I see the reason for his muscle strains.
Top

Why not Dier? He absolutely bullies players.
Top

Very strong, yeah. But I don't see how he's as strong, much less stronger than Kompany.
Top

Both Wes Morgan and Salomon Rondon are stronger too.
Top

Wes Morgan is stupid thick. Dier not in that category.

Rondon is arguable maybe, but also stronger I feel. But I think Kompany over him.
Top

Also, he had a great game yesterday. Laporte tho...damn.