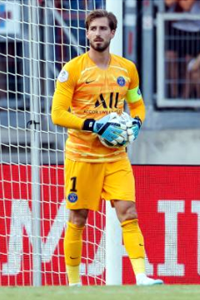 I'd like to at least this guy tell me something on PM and will could have communication to solve the problem... So I apologize I made a mistake and I should make suggestions before updating players and have discussions with people about it.

But, like I said to the guy who report me the complain, I have a whole leagues to updates because it's outdate for years with a lot of overrate sets, unbalanced set or unmade sets. Most of times nobody cares or the last updates was already by me and that's why most of time I forgot to post a message before updating, but there isn't any irrespect behind it.


About trapp now, I still find him as a bad keeper for a top team player, that's why he was under Areola in the beginning of the season and be back as a starter when Areola made some crazy handle mistakes... PSG is now looking for a new better keeper during this window transfert. Trapp is tall, and have a nice placement intelligence to not have to move much to push balls, and also have incredible reflexes, but for me that's all, he's not really good to compare with all the top teams keeper in Europe. I think at least jump should be decrease. Konami and Fifa both have different way than us to rate jump and I think we rating it too high for tall keaper. Trapp doesn't jump much, he has a nice placement, to not have to jump far away to stopp balls. He doesn't using leap. That's my opinion, hope to have feedback here, at least in private if the guy you made a complain doesn't want to make this "story" public.
They have eyes but cannot see; they have ears, but cannot hear; they have tongues, but cannot speak. They are like cattle.
Top

I agree about the JUM decrease. A 10 points downgrade sounds harsh, I'd go for a 83 maybe, but otherwise you're right about his leap. He's a good diver "technically", he can be strong-handed in his dives and stop shots well, but doesn't demonstrate incredible leap. Nothing worth a 88, at least.

And yes, Trapp is totally average for a team like PSG. He's a good possession keeper because of his technical ability and good clearing, but that's all really.
Everyone knew it was impossible. Then came along a fool who didn't know it, and he did it.
Top

High skills like ever, he's on the road for a new great season.

High skills like ever, he's on the road for a new great season.

you know, those are errors that maybe all keepers make once in a while and don't reflect general ability, but i remember when Trapp was bought by PSG, and i was watching videos of his performances in the bundesliga, and i was thinking even back then before he did anything for PSG: "why?" For what PSG have been aiming for, the CL, he's not an improvement over Sirigu and actually always had technical weakness compared to Salvatore. Was Sirigu so negative in the season before Trapp came and replaced him? Trapp always felt like a sideways acquisition at best, and my impression in the beginning was that he was a downgrade on Sirigu. I was always very puzzled by why PSG wanted Trapp considering their ambitions.
If you don't put effort into your post, i won't put effort in my response.
Top

They thought trapp would be better for ucl but even sirigu was better. Don't know why they did it. Looks like they bought him just because he's German and neuer was on top form. It's fashion to bought German keeper good with their feet. Psg strategy suck. And it's spoke about neymar instead of a world class keeper.
They have eyes but cannot see; they have ears, but cannot hear; they have tongues, but cannot speak. They are like cattle.
Top

To me, it's pretty obvious Trapp has good skills as a keeper. He has it all, his only major flaw, on the technical side, is that he just can't catch a ball.

He just has insanely bad decision making and mentality. He's a fuck up machine and can't stand any kind of pressure.
... Which is kind of a problem when your club wants to win the CL.
Everyone knew it was impossible. Then came along a fool who didn't know it, and he did it.
Top 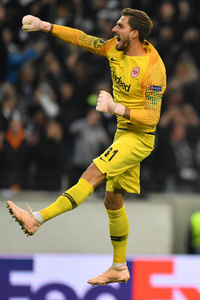 What can I say of him since he went back to Frankfurt?

...Well, he's basically the same flashy, eccentric keeper with sharp reflexes right from his first games at Kaiserslautern and then Frankfurt. Summarizing, he's such an awesome keeper when in form. Unfortunately, he's not a really consistent performer at all, shifting from pretty solid to quite erratic displays between games.

Would I change something on this set?
Mostly lowering TW a bit. It is surely a challenge to command an inconsistent three-men D-Line as Frankfurt's, but Trapp is not a really vocal keeper himself. Those occasional issues of miscommunication has led them to conceed some nonsense goals against. Probably slightly higher Aggression as well.
"Willy Wanda is Chinese!!!"
Top
Post Reply
30 posts