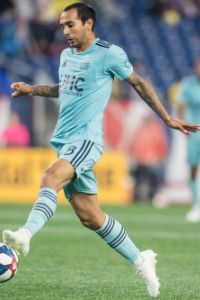 Called up for United States friendlies against Slovakia and Denmark.
Top

not to say 58 isn't right, but is there a source for that?
Top

Thanks, updated his weight.
Top

moved to puebla
"Only the strongest survive"

What do you think about dropping consistency and condition he has only played 1 match this season I think hes been mostly on the bench.
"Only the strongest survive"

Absolutely, honesty i dont know why the hell i ever gave him 6.

He is so inconsistent.

He is very talented but plays like an idiot

Moved back to club america he will get another chance hopefully he takes advantage of this one.
"Only the strongest survive"

Moved to Club Tijuana
"Only the strongest survive"

On loan to Colorado Rapids.
Top

ahhh I'm pretty sure his OVR is crazy high, but I cant really drop stats much more ... maybe his pace is disappearing even more, just minor blips here and there but otherwise looks low 80s often. Technically really good, and from what I could tell, 20 min vid of him in 2016 in Mexico https://www.youtube.com/watch?v=qJFVYff3hr4 and with some other vids he looked quality in Liga MX. Last season with Colorado was decent for a really poor near bottom side, got some long range banger goals and offered that threat in his dribble/mazy connections. This season he managed to make a good amount of goals, but was more reserved I think, it seemed maybe his legs can only carry him so many kilometers a game and is more conservative with his actions joining the final third.

I imagine the Revs are moving on from him since he will turn 34 this year and they in De Juan Jones have a young talent adapting well to being a starting LB, as really aside from Castillo only getting slower/less stamina he would be a quality player for a team to have...it was in Montreal that out of the blue (Castillo was not having a bad game nor had he made nay mistake) was subbed out and Jones dropped in, the kid immediately proceeded to do this https://www.youtube.com/watch?v=Cd7jdZz0oRM that was Diallo falling to his ass - supposedly a solid French defender according to Adrian. Castillo was livid for being subbed off for apparently no reason, but that marked the beginning of the end it seems.
Top
Post Reply
12 posts • Page 1 of 1