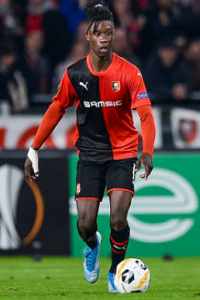 I updated him a bit. This kid is full of potential, really playing great for a 16 years old starter on the mieldfield. Again making a good first half against PSG. The kid having lot of energy, always giving support, moving fast and quick with his body to eliminate pressure. Showed some interristing passes too. Let's hope more in the future.
They have eyes but cannot see; they have ears, but cannot hear; they have tongues, but cannot speak. They are like cattle.
Top

LPA, SPA and SPS look better too. Great potential, one to follow for sure.

Backing up Adrien's opinion: this kid is super press resistant with smart body movement and quick shifting to evade pressure. He's got good DS and his capable to carry the ball forward to the point the opponent is forced to foul him.
Speaking of fouls, I'd say he has a bad tendency of falling very easily, too easy really given that he's shown he's got good balance and strength. His body control rating can stay low for now.

He's also really good at pressing, quite smart in his positioning to limit the opponent's options and quite strong and clean in his standing tackles and shoulder charges.

I'd describe his use and ability of passing as such: SPS > LPA > SPA > LPS. He's got good pace and his short passing but isn't really adventurous with it. His LPA is pretty nice, can shift play from one wing to another quite nicely, and he picked up an assist with it yesterday.

He'll be one to watch this season since he seems to be way, way above average for his age and seems to be progressing at a scary rate.
Everyone knew it was impossible. Then came along a fool who didn't know it, and he did it.
Top

I watched his last season game as a starter from last season and I keep same impression than last sunday against PSG. He's full of energy, very agressive into leg of opponents to keep ball. Always in movements to give support wich make him playing like the leader of the miedlfied at only 16 years old ! He's a bit like an alone central mieldfielder in deep. Very quick in his first metres to eliminate pressure and opponents, and able to make very quick body turn. The way he turn and protect the ball with the outside of his left feet his impressive, it's almost impossible to keep him the ball without making a foul. Like we mentionned his passes are quite interristing and promissing and could be something better if he keep improvments. We'll keep looking closely at him this season because more and more I'm watching of him, more and more I'm sure he'll be the next big thing from Ligue 1. I have the impression this kid is a world potential. I don't know how much mature is this guy and wich spirit does he has. But if it's as well as Mbappé, he'll be as much talented very soon.

I've checked around this guy, and it seems that he has both Angolan and Congolese nationality (Not DR Congo). While some sites show him as Congolese, Rennes official website shows him as Angolan.

Just a small detail that could be changed
Top

His goal against Lyon.
Everyone knew it was impossible. Then came along a fool who didn't know it, and he did it.
Top

His tackle percent pg is very high, more than 4 tackles per game. He's very tackle oriented in the defence, making a lot of fouls as well. He has 1.12 sliding tackles per game and 2.12 pg. Really high numbers.

In the offensive part of the game he is showing huge tactical intelligence of the ball. His game vision is very good as well. He isn't adventurous at all but his IQ level and game vision are really great, so he knows when to make a diagonal, when to try a through pass (although he is rarely trying them) and when to give the ball back.

He has some problems while he is dealing with situations on his own half, as he's sometimes making a wrong choises in these kind if situations. He is much better when he was a field in front of him. And yeah, he is having a problems with physically tougher players.

Btw, does he need Anchor Man? He doesn't play such a high on the pitch and he is mostly staying in front of defenders, not always though, as he has a tendention to shield the ball to the opponent's half and he can be active on opponent's half from time to time. We also can't see him taking the ball constantly from the defence, far from that. He has 25 contacts with the ball per game and that's much under the average for one midfielder.
Top

As I pointed out on Discord, Opta revealed that he's played more minutes than all u18 players in Europe combined. Let me tell you why this is insane.

Kid is 17. This is his first full season at pro level. You might think him playing so much means his team lacks options in the midfield, but truth is they're third in the league. They're one of the best teams in the league this season and he's the main reason why.
Like VUKDS said, he's really damn smart. He's a great tackler who always stays on his feet, knows very well how to pick his runs forward and how to end them with a good pass.

He was very decent against Marseille, who is also one of the best teams this season (actually, probably 2nd best after PSG) and whose main strength is their midfield. He's consistently good, but the fact that he stands out against the best teams (mainly his games against PSG and Lyon) tell a lot about his ability to improve at/to a higher level.

I'm not sure about Anchor man. It was a change made by Adrien and I don't have a specific opinion on it, though I can see the reasoning behind it. I wouldn't touch it, but he can probably explain more in depth why he gave this set the card.
Everyone knew it was impossible. Then came along a fool who didn't know it, and he did it.
Top

Ocrin wrote:I'm not sure about Anchor man. It was a change made by Adrien and I don't have a specific opinion on it, though I can see the reasoning behind it. I wouldn't touch it, but he can probably explain more in depth why he gave this set the card.

For the same reasons VUKDS describe him: tendency to stay deep in the mieldfield just front of center back. I didn't watched him until the last update anyway, I'm not following Rennes this season. But last one he didn't used to come upfront much at offensives duties.
They have eyes but cannot see; they have ears, but cannot hear; they have tongues, but cannot speak. They are like cattle.
Top

His retention, roulette skills and ball carrying skills are brutal. Could be an absolute monster in the future. DS is very similar to what Frenkie De Jong showed at Ajax.
Everyone knew it was impossible. Then came along a fool who didn't know it, and he did it.
Top

I'll try to find highlights/clips and make gifs to justify the value, but dude is really sick when it comes to that.
Everyone knew it was impossible. Then came along a fool who didn't know it, and he did it.
Top

Consistently draws fouls because he's just too fast on the ball. The only thing letting him down is the fact that he's a diver and falls at the slightest contact to draw fouls, but his DS his pretty great.
Everyone knew it was impossible. Then came along a fool who didn't know it, and he did it.
Top

Note for the future, I might have overrated his passing. Quality is clearly at this level but he's not adventurous nor incisive enough.
Everyone knew it was impossible. Then came along a fool who didn't know it, and he did it.
Top

And he's making a lot of silly passing mistakes as well, even when it comes about a simple passes. That's usually happening on his own half. Besides accuracy, it might be a mental and experience issue as well

On the other side, DA&DS combo is too much for me at the moment. He can shift some good speed while shielding the ball but his control goes of at some of these situations. He can deal well at the little space while dealing with the pressure but his control ain't impressive at all and it's sometimes letting him down when he goes into the slalom

He is very talented player but still far away of being a finished product.
Top

Not sure about the DA/DS thing though I know where you're coming from. Control isn't the best but still pretty good and good enough for him to consistently draw fouls. He's good in tight spaces too. As I said, his dribbling isn't the issue, it's the diving. He goes into slaloms looking for fouls, not looking for danger, sometimes he looks like he won't reach for the ball only to touch it at the last moment, flop down dramatically and get the foul.
Everyone knew it was impossible. Then came along a fool who didn't know it, and he did it.
Top

He is slow to make decision as well in these situations, he ruined a lot of situations and counter attacks with the poor decisions and giving the ball too late
He is much more rational when he is dealing with the regular situations
Top
Post Reply
19 posts • Page 1 of 1