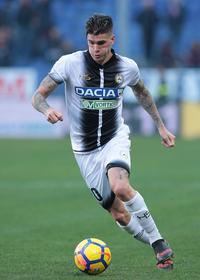 I had seen him as its main feature a insane shooting, more than his overall speed. SA near the yellow and SP something like 85. It also makes a lot of shots per game, and most are dangerous if not all. Even in the photo seems to be doing a shoot.

He plays and amazing match today, showed very good DA and crazy SPA. Pure TEN/TW switching positions with Fariña to be the conductor of the team.
His first touch and control are really good, very precise to touch, control and playing quickly
Top

78 in shot accuracy not is too much? also I see high 85 in kicking power, Alan Ruiz has the same value and his shot are much more strong.

: bad game as all Racing, very individualist and very fragile in the melee (bb battles), is a pen/pluma.
Top

I don't see anything wrong with his shoting numbers, he's a really nice shoter...last tournament proved it several times.
Top

I was watching the game and I thought about this thread...the guy is a really great shoter...specially from long range.
Top

Fucking crazy this guy is a hell of shoter, he's got the goal net in his head everytime he takes the ball and the direction of his shots is amazing; and showed incredible shot power though...i'm pretty sure he can have a huge improvement in there...also he needs *Middle Shoting
Top

Yes, really I was wrong, his shots are really awesome.

His tech can raise 2 or 3 points, I don't think it is less than Vietto here, what do you think?
Top

He's best Racing player imo, even with his mistakes in his decision, he always is supportive and asks for the ball in difficult moments. Also he's a really hell of shoter, he's always dangerous as he did 3 in a row in last match which were really near to score. I don't like when Merlo puts in the side, he loses space to play and link up, he clearly have to play near the opponent's box. He should improve a little his passing and his decision making but probably he should have better stats.
Top

Is a great long passer, are much better than the shorts clearly..

Vickingo wrote:He's best Racing player imo, even with his mistakes in his decision.

I wouldn't mind raising his mentality, this guy is the only one who takes the ball and tries something in every moment...even with his mistakes he's great in terms of taking responsability of the situation and tries to make his team play.

Edit: I keep watching the same about his commitment despite his mistakes, showed awesome speed on the ball vs Belgrano and was dangerous with his dribbling.
Top

He's a good player, I don't understand why Racing's fans hate him.

I saw the game and he played really well, he's good starting in the left side to the center dribbling and has a good vision (and accuracy) to give long passes.
Top

Maybe his att could be in a future in low green, also his bb is more than decent, and as Victor said he's the only player that thinks something different in the pitch, moves a lot trying to carry the team, but he's playing with kinda ex-players or players who cares a shit playing football. He's showing pretty good lps - maybe his lpa could be little worse - really nice da/ds. Today did a fantastic pass between the defenders to Zucu, something to keep in mind for a future update.

Scaramuso wrote:He's a good player, I don't understand why Racing's fans hate him.

Because the fans of Racing are fully morons. Insult (?) to Saja because they say that he isn't a leader or some shit like that.
Top

He's best Racing player, he's the only one who takes the ball and tries to do something in attack, and Merlo is so defensive that it seems he doesn't like De Paul and he's saving his ass every match. He's a hell of shoter, I wouldn't mind raise it again, probably one of best shoters in here. Also he needs better att/da/spa/tech/bb?(not sure in this but seemed to be able to hold up heavier players)/sta/att awareness must be 3/tenacity/tw.
Top