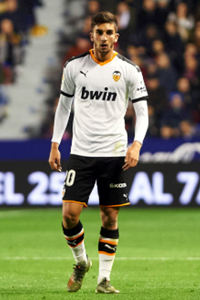 by Fixer
Alright so this is what I've come up with for Ferrán:

As for cards, Double Touch is a must. He also needs Mazing Run, Dribbling star.

His style sometimes reminds me of a young CR7, tall slim guy with neat pace (although I think he doesn't show his full speed as often as he could, I do understand he likes to be in control of the ball aswell so it's rarer to see him attempting a full speed run to the space if he can beat his opposition while mantaining control of the ball) and very good close control, he takes no time to progress forward with the ball and offers really great counter attacking plays. You can also see glimpses of a good finisher, put together with a nice curling ability. His crossing is also interesting, seen a wide repertoire of passing from him.

by morenol80
What an amazing prospect Valencia has in Ferran Torres. We always knew he had the potential, but until now, he still didnt show it full time. He was like shy or conservative. But this season, with the plague of injuries Valencia is having, he is getting much more minutes, and he has taken advantage of them and he is finally showing what he is capable of:

He is fast, he has a great close control of the ball, he has a great burst, he can dribble to both sides, he can shot hard, he combines well and has good vision for the through ball, can cross the ball and is showing lately that he can score himself too. He uses is left foot quite precisely and scored at least couple of good goals with him (vs Lille this year and vs Sporting Gijon in Copa del Rey last season).

He reminds in some aspects to a young Vicente Rodríguez, but right footed. Lets hope he can reach that amazing level Vicente had.

I think Stamina, Shot power and Balance can go up easily. He runs a lot and doesnt seem to get tired, he shoots hard and, even if he looks skinny, he is stronger than what it seems. He also wins some aerial duels due to his decent height.

by 7Jonathan28
He could play at the both sides. And i think his acc=ts.

by Eternal Night
One of the nicest surprises of the season.
He is improving in all aspects very quickly. I think we will see him very soon in Spanish NT if he continues with this progression.
He looked very shy in his beginnings, but now he has taken the necessary confidence to be an important player in VCF and his dribble, speed, intelligence and good shot are making him starter in recent games doing very good performances.

What a great player Valencia has...