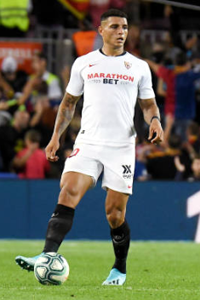 by Eternal Night
This guy is a beast. He is a mix of strength, speed and good anticipation, invulnerable in aerial duels and solid in 1v1. I'm surprised by his quick adaptation to Sevilla FC and La Liga with his good performances. I don't know what his level was at FC Nantes, but in Spain he is one of the best CB's. Seriously, he is likely to be called to Brazilian NT.

He deserves an upgrade in 3,2,1...
All times are UTC
Page 1 of 1
Powered by phpBB® Forum Software © phpBB Limited
https://www.phpbb.com/