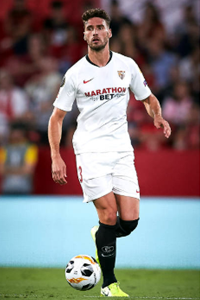 This player wasn't in the forum. Created again.
The intelligent people are full of doubts while the stupid ones are full of confidence.
Top

The defensive trio, now Sergi, Kjaer and Carrico, has been one of my main focuses since the first games i watched. In particular, Sergi is the most well-rounded of the three in the sense of combining good physical, technical and defensive abilities. He's as solid with the ball as Carrico, yet he's the last of the three trusted with the first pass atm. It's first Carrico, then Kjaer with his proficiency with long passes from the back. Sergi has shown to know his way around as a defender with a decent attacking mind and has possibly had the more remarkable choices of the three on the ball in his tendency to drive up to the midfield and provide assistance to the side. It's a tendency he hasn't explored as much as he would probably like because he's not getting the ball by default, i'd safely give him a raise in Att and Agg though, a point ahead of Kjaer and on par with Carrico for Att, at 62, around 66 for Agg. Sergi is also a more effective defender than the set currently suggests. He is aggressive in his approach and good at beating opponents one on one. Although, he does have a serious weakness as a defender, at least compared to the other two. He is far more liable to lose his position, or venture outside his area and leave a gap that has definitely being taken advantage of by the other team more than a couple of times to this point. Also, his style out of the three is the most individualistic, basically take down his mark without much attention to his surroundings leaving it up to Kjaer to cover for him. The numbers i have for him at this point are Def 81 Resp 83 TW 73. Numbers for BB, TS, Sta look really accurate, the most reliant defender on physical attributes of the three. Other than that he just needs a small reduction to Agi and DS, he is around 72 for both. Also, Sergi is not as consistent as Kjaer or Carrico, form 6 is unnecessary . In conclusion, a good player that's at least solid in all categories, but the weakest Defender of the trio, he is more like good filler especially because he adds some mobility and pace to the back-line. Some more tweaks, SPA74 DA 73 Tech 74 LPA 77 LPS78 Curl 70 .
Top
Post Reply
3 posts • Page 1 of 1