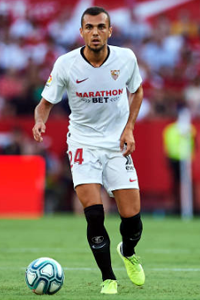 He's a player who still has a lot to improve but he's showing that he has a place in La Liga. I think that Eibar is a perfect team for him, a perfect complement for captain Dani García in midfield. Player who creates a lot of danger joining attack.
I've done a deserved upgraded.
The intelligent people are full of doubts while the stupid ones are full of confidence.
Top

Fk goal vs Alavés today https://streamja.com/jz6o
He's doing rather well at Sevilla, his teamwork is ahead of all CMF's in the team.
Top This guy is a very good player. He's a bit wild, but eventually he managed to make adventage of it. He go past player and enjoys 1v1 a lot more than it's usual for a modern day midfielder, but he's pretty good at it. His off the ball movement is also good, just look at his movement before De Jong's goal, occupied the free space between the lines well, recieved the ball and just released it to Navas on time. He's so instictive but yet very intelligent, combinative, lucid, with unique style of play.
It's me, Relja. Live and in stereo.
Top
Post Reply
5 posts • Page 1 of 1