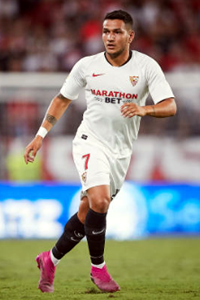 Really like the player, but his decision making and inconsistency bother me.

His passing and overall his delivery into the box are average. I feel he has the technique to be a good passer, but the guy is blind and always cuts in trying to shoot from outside the box. His shots are usually decently powerful but his placement intentions are minimal, which is a shame.

He's a very good ball carrier as well, very comfortable on the ball with good speed and quick turns. As you would expect from this type of player, his physique is weak, but his playstyle doesn't require strength and he has enough speed, technique and aggression to be a threat when he's on his day.

Monaco seems like a team built for him and I hope he can develop well here. He would be a great player if he had better passing and was a bit more composed near the box.
Everyone knew it was impossible. Then came along a fool who didn't know it, and he did it.
Top

Set is old and could need some review. But yeah it's gonna be very different. Bernardo silva was I'd say a slow player but with great decisions making and such a great close control that he never loosed it. He was a hardworker too and gave nice key passes. Marcos lopes is more on pace, great speed on and off the ball, but loosing more balls, not same good eye for passes, and like you said not as good for decision making. From all the player moved, I think it's the biggest change but I guess Keita Baldé could be a starter on the right while using Jovetic and Falcao as the two forward. Also don't forget that Boschilia gonna be back from one year injury. Before it he showed great potential and I'm pretty sure he gonna be back as a starter if he recover quickly his previous level. Especially that he was a great FK taker (Monaco main weapon this season).

EDIT: oh and i forgot there is ghezzal too there. he's left feet on the right could be a great help. He's a smart player with beautifull touch with his left. A gift player.
They have eyes but cannot see; they have ears, but cannot hear; they have tongues, but cannot speak. They are like cattle.
Top

Actually I wouldn't say he has great speed off the ball, he has good DS and ACC but his final speed isn't that impressive.
Nowadays he plays wider and his positioning is more the one of a winger than a AMF, which suits his skillset, strengths and weaknesses better IMO.

What changes would you do?
I made a small update but I think AGG and DS might be even higher. Not sure about the rest, the set reflects him otherwise in my opinion.
Everyone knew it was impossible. Then came along a fool who didn't know it, and he did it.
Top

I'd like to make several change in the set.

Firstly he create a lot of danger, coming a lot into the box as a "free roaming", scored a lot. He's worth a 80-81 attack in my opinion. He's also a way better finisher than the set suggest. He's able to place nice shot, i'd go for something around 79SA and 73ST (not sure he's ST really is, but I'm sure he has better connection than the current low grey).

Also I'd question his Agi-DA. He has a nice burst without the ball, but like Ocrin said, when it comes to long distance, his pace disappear a bit. When he's at full speed, I remember him loosing a lot of times the control of the balls, I don't see him with current DA. Could be drop to something like 83. And he doesn't seems to use his body much to trick. He's making a lot of right line passing player with (If Ocrin now the english word for "grand pont"). He uses a lot of step over and not really make great turn with his body. I'd lower it to something like 84.

I think sta could go up by few points too, and then I think Reaction card could be add.

Oh and I forgot about aggression. He seems really agressive offensivly to me, going quickly to attack. May be response is a bit better but not sure at all on that point.
They have eyes but cannot see; they have ears, but cannot hear; they have tongues, but cannot speak. They are like cattle.
Top

grand pont is like cow something iirc. agree with your suggestions too, looks more like the player i have seen that this set
Top

Nice goal in a cup game against Guingamp today.
Everyone knew it was impossible. Then came along a fool who didn't know it, and he did it.
Top
Post Reply
7 posts • Page 1 of 1