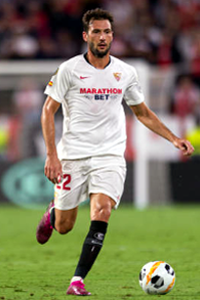 I've updated him. Back to his older standards...imo he should never have below orange for technique. I've also come to think of him as a good ball holder but also pathetically weak for a guy of his frame. Never been overly impressed by his passing either, but I think he's a better crosser. I mean, he's an OK passer and he assists well but he also fucks up quite a few passes too. His numbers tend to be OK, and he's often a good offensive weapon, but I'm not too sure on how to rate his ATT. Like, inside the area he's resourceful, but he feels so slow at times. He's all about having the ball and making it go forward if possible (as much as he likes to keep it), but at the same time he doesn't always keep up with the flow of the play. Summed up, extremely talented player, slow, annoying, but so extremely enjoyable to watch when he ignites his game and looks alive. I think if he was more consistent he'd be a good goalscoring midfielder aswell, something around 9-10 league goals per season.

https://www.transfermarkt.it/franco-vaz ... in_id/3437 He is playing with Argentina now so his nationality should be changed

. Also i really like the new update which is more or less how i rate him and i really think that now it shows much better what type of player Franco Vazquez is . The only thing that i would suggest is a bit higher BB for him , since from what i've seen he doesn't look weak at all but you know him better than me