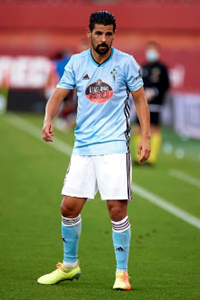 Konami's default Form 4 and Ment 68 look even generous if you ask me. He's a good player, technically gifted and really dangerous and incisive on a good day... but those good days tend to come out of three or four terrible days when things go ugly for him and he doesn't seem to care.

He's probably been better when he's came out as a sub. He tries many stupid things though, but I think that if he was a bit more consistent he could score quite a handful of goals. What shall we update him with? ment 68 looks fair, but form 3 looks like a good possibility.

I think he could use an increase in form. Last season finale he was in great shape and pre-season has been great so far. It could be 5 at least
Top

I know that and I'm not talking about a few matches. I followed Celta last season and he brought up his level regularly during the entire second half of the championship! If I'm not mistaken, almost all of his goals came in that period. And it's not only that! He contributed greatly in the offensive game being incisive and dangerous. Maybe I went too far suggesting Form 5, but I think 3 it's too harsh. Could do with 4?? It's just my opinion. You guys have way more experience doing this...
Top

Im don't fully agree. He played 2264 minutes last season, being the 7th player in Celta squad with the most minutes. I mean, I wouldn't consider that a peripheral role. He was a regular starter (24 times in the starting XI), with an amazing second part of the season.

Form 3 is maybe too harsh, but that's just my opinion.
Top

Seriously! No one's gonna keep an eye on this guy? I suppose many of you don't watch Celta de Vigo's games, but he's doing some amazing stuff.
Top

He is doing brilliant and in a constant basis. No wonder he has been called by Del Bosque. Somebody should think of an update.
Top

Why is his FORM so low ? He performs good most of the times , for me his FORM should be 5

Updated , was quite underrated and outdated , made some big adjustments in terms of his overall attacking attributes , he's quite solid as playmaker , like a poor man's suarez , is able to score , get past players , create , bit lazy but i think he changed quite nicely in that aspect this past season , his consistency issues are things of past now , he matured as a player a lot , definitely helps when you're the main star of the team .
Top

Nolito is such a beast this season, he is very underated player cause he just playing for Celta Vigo . his top perfomance this season cause Berrizo, yeah thats true for all Moderator of La Liga you should looking new stats for Eibar / Villareal or mediokre club too But i see his Swerve is too low for him if you watch his match against Barca & Real need a changed!
Top

Who underrates Nolito?...WTF dude, he's one of the most popular players in Spai and even in here his current stats make him top notch... and Villarreal mediocre club....

I hope he will sign with Sevilla. Maybe this set could be added to his classic topic before any downgrade or some tweaks because of his little poor performances at manchester
Top

Caught a bit of him and I do believe he needs less agi and DA. He did warrant that 89, perhaps even 90 during his prime but i don't know he doesn't look as smooth as he used to, it may be a matter of form as well but even yesterday he played a good match and he still didn't look like those. He's a good dribbler, really good in tight spaces really, but I think he shouldn't be above 'Mudo' Vázquez for example....(Who is arguabily better than his current 87 imo)

Posting some of it here

I watched what i could find on him this season, half a game vs Getafe, 36 mins vs Akishar and 76 mins against Kransodar in the Europa League. The things i noticed about his game in general is that he was attempting to play as a link man basically with quick and accurate 1-touch passes. He did well actually in providing options, especially against Akhisar and Krasnodar where he played in more central roles, as an SS and inside mid respectively.The fact that he moved, not a lot but smartly, with clear intent to accommodate his team was quite surprising to me because my impression was that he was more detached as i had mentioned in discord. I think that impression stemmed from just having watched him vs Getafe before. In that game he played more like a wide forward and didn't interact with the game in the same way but he also wasn't as bad in terms of team-play as i thought either. In general he relied little on speed and dribbling, His actual Speed is closer to what Prcooce suggested. He hardly went all out so i t was difficult to tell but he had his best displays against Getafe where his role demanded it more. I think his displays ranged from 74 and 77 TS, 79-81 Acc. While Top ( speed ) is in the name i'd rate his most consistent showings at TS 75 Acc 81 personally, i think that would be the most accurate on average.

On the ball he didn't attempt to dribble other than some small displays of his control to elude his marker. He generally relied on unloading the ball which he did very well. His passing looked very effortless and crisp, and his close control very wholesome. He gave the impression of a great technician doing little but with great success and style. I thought he might need lower DA like Fixer had suggested but looking at him closer i've changed my mind. He is such a lovely player in that regard. Vasquez who Fixer had compared him to is now at 91 so the gap between that and 89 is also quite fair. On account of limiting his dribbling, Agi should drop considerably. He is a bit worse than i thought. He needs just enough to give him that effect of fluidity paired with his DA but not more, i'd rate him at 80 atm.

I'd actually give him a boost in Def. He has quite a decent work-rate honestly and applies himself to provide assistance for his team like i touched on when talking about his teamwork. He applied pressure and even made some very long returns away from his position to successfully bite the ball from the opponent at times. I was surprised.

In the games vs Getafe and Akhisar he made some impeccably timed runs in the back of the defense, passing between SB and CB but he didn't manage to score. When the game shifted to attacking in the final third he was typically of the ball and moving with clear intent to become a target in the box. Something that really showed in all aspects of his game is how eager he was to react, both in assisting his teammates, defending and especially attacking he was always ready to pounce. I'd definitely keep Resp as is. Based on the attempts he made as a shadow forward i'd feel hesitant to reduce his Att tbh, in terms of timing and control his runs were comparable to Ben Yedder's. He seemed like an intelligent player with great instincts, like he would still thrive in a smaller team where the focus was more on him.

Something i noticed is how he struggled to maintain certain aspects of his game from one match to the other. His worse display was against Akhisar where he basically just had a couple of the aforementioned attempts inside the box but didn't look good otherwise.
Against Getafe he was ok, he provided some assistance in defense and also some good runs in attack. Against Krasnodar was his best game, he really looked solid in everything he did in this more involved role. Based on this small sample i'd say his core play-style doesn't change but his the success of some of his attributes and his performance are prone to fluctuate. While this might be circumstantial he has an proclivity for not performing to his best standard frequently in the past aside from his time at Celta. Based on what mpression i have of the last season as well i think he is a candidate for a drop in form, i think he is one of those cases where that would be preferable than making a lot of reductions because he is clearly still a class player in my eyes.

He might be a shadow of himself ( i haven't seen him in Celta really ) but from a fresh perspective he looks like a great player past his prime, nothing more nothing less. I hope this is informative and helps you with the update.
Top

He's fired up since pre-season, scored this beauty today (yeah, Marc Roca marking via bluetooth its seems lol): https://youtu.be/Hz0NyGcHe6I?t=63
Lets hope that he can maintain this form for a long time
Top
Post Reply
79 posts