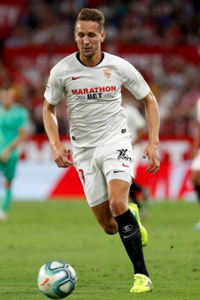 by Fixer
His movements are neat, but he's not finding himself in good scoring situations. He hasn't taken advantage of his heading skills either. Overall good player to have, but I feel he's gonna end in the bench soon. Surely Chicharito seems a more reliable goalscorer at least, but don't get me wrong I really liked de Jong's work off the ball, very smart movement to open passing lanes and making defenders look alive.

by percival
he's in retired?

by sunsaegnim
Thoughts on his sa? I find him pretty wastefully this season

sunsaegnim wrote:Thoughts on his sa? I find him pretty wastefully this season

In my notes he appears with 78 in SA. Maybe in Eredivisie he was a demigod, but in La Liga he has been a big disappointment.

Btw his Attack didn't seem like anything to review. He has missed many relatively easy shots and he hasn't appeared in the important moments of the games. No more than 80 in Attack for him, honestly, I wasn't surprised by this player.
All times are UTC
Page 5 of 5
Powered by phpBB® Forum Software © phpBB Limited
https://www.phpbb.com/