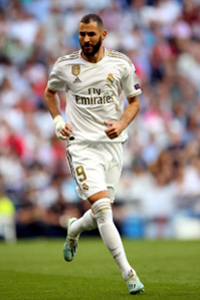 Not only that.... His ball trapping is one of the best...he kills the ball easily and controls difficult,pacey short passes and keeps it very close to his feet. There's no arguing with the fact why he deserves 95 BC... he completely deserves it.
The parable of this world is like your shadow - if you stop, it stands still, and if you chase it, it distances itself from you.
Top

I remember he was pretty fast without the ball two season ago. Can't tell really, he never really run also, always walking most of the time. May be he declined a bit.
They have eyes but cannot see; they have ears, but cannot hear; they have tongues, but cannot speak. They are like cattle.
Top

I personally would go with 83 max also. The times of Karim running beside the touchlines at Lyon has passed. At Lyon i would say he was even faster then 85, he gained more muscles at Real aswel i think that's the reason. And ofcourse he has a diffrent role then he had back then.
Sporting Clube de Portugal meu amor / Working on new sets and updating Liga Sagres
Top

But what's up with Benzema? He walk with your head on the moon?

Fuck it, it seems that "disease" of Fernando Torres infect he...
KEEP CALM and HURRAY BENFICA!
Top

Rmb2w wrote:Not only that.... His ball trapping is one of the best...he kills the ball easily and controls difficult,pacey short passes and keeps it very close to his feet. There's no arguing with the fact why he deserves 95 BC... he completely deserves it.

So, he could do that with orange BC. Red BC is for ridiculous traps with all parts of the body, not just ground passes.
Top

I think he needs an updrage in some aspects such as form, speed, tenacity and shot accuracy he is overvelued in some of those skills.
Top

He didn't really look anything like this AGI and TS yesterday...

Had an absolutely storming game yesterday. Brilliant. Even had a good header goal. though it raises questions as to why he can't do this on a consistent basis. lazy? he covers a lot of ground, thats not it.
Top

i love watching him shooting on goal, almost always aims just near the post (e.g. last match against Sevilla), he has this special "touch". Sometimes he lacks of the "thing", i wouldn't say it's lack of form or lack of mentality. He is neither lazy nor slower than before. It's something in his head.. yet i wouldn't call him mentally weak. One thing is sure - his talent is immense. I just wish i will not say in the end "he could have done much better in Madrd".
Top

Just another video proof which shows he chooses placement over power.

Adrien wrote:If something shouldn't be raise that would be his ment for sure. He's lazzy as hell.

respectfully, i disagree. This might have been true in the past, but quite clearly mentality is one of the aspects that he has improved the most this season. Whether it's chasing balls and pressing defenders into committing turnovers, it has become a big part of his role now in the team.

That being said, i think for the way he moves in and around the box, 85 attack is too low for him. His ability to get to the first post, or simply to be at the right place at the right time in the box is better than it used to be. he is a 90 attack to me. He is far from being a static player either, he doesnt get enough credit for how much he moves left and right to accommodate CR, while still being dangerous when he has the ball.

I would also slighty re up his form, to 5 as for his consistency this season, quite clearly, chaining games is doing a lot for him.

His heading is also another aspect of his game that has improved. Just in terms of eye coordination, and precision. There used to be a time when he couldnt even head the ball properly, now he is a viable target for Bale.
Top