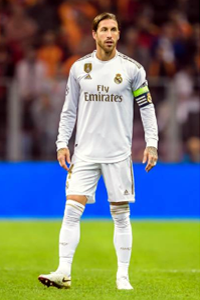 fitzcarraldo wrote:@jurgens probably too soon and obviously too harsh.

On the contrary I'd say it was looong over due and too generous.
Top

I agree with Jurgens and with this update. However, I'm still concerned about his DA. 83 is a lot for someone like him, he doesn't get past players that often and when he does, it's often thanks to his athletic ability. 80 is a max for him. I'd even say 79.
Everyone knew it was impossible. Then came along a fool who didn't know it, and he did it.
Top

His SP could be even slightly lower, around 81-82. It is his Swerve which is more impressive any time he attempts a long range shot or a long pass. I have with with 85 atm, but it could be even at 86.
"Willy Wanda is Chinese!!!"
Top

I don't see a problem with him being on 75. His defensive quality is poor, he's playing, which he is, like a former SB moved to a CB position because he's strong. He's good ball playing defender, the most dangerous CB in attacking sense, great headers, but in terms of defending, he's retarded, he can't mark, he's brainless. Imo, the highest possible DEF value for Ramos is 77, maybe, but maybe 78. I wouldn't even think to give him 79 because it's too close to yellows.
Top

He started his career as CB at Sevilla and was signed as such by Madrid. Ended up playing as SB for years due to his great stamina and also how Madrid handle (or used to handle) things.

He started his career as CB at Sevilla and was signed as such by Madrid. Ended up playing as SB for years due to his great stamina and also how Madrid handle (or used to handle) things.

He was really, really bad at CB back then though for madrid... it just seemed to me like an absolutely bizzare move all round, he was shit at sideback too... he was awful at basically everything from what I recall, just mindless. It seemed to me like they just lumped him in there, although the other options were far better... i guess cause hes young and spanish
Top

Well he had a lot of potential. In the end the years went by and he was still a brainless idiot with a lot of potential. He's easily one of the most talented defensive players I've seen, he has basically everything but brains, and even that could have improved if someone had bothered to actually coach him when he was young. But we know Madrid doesn't work like that, they throw players at the deepest part of the river and it's either swim or sink.

Being young and spanish probably did him a favour, but anyway he managed to swim. He's always been a favourite of the press too, save for a brief period around 2009.

I always think if only he is more calm and resourceful, he will be "Cristiano Ronaldo" in term of defence.
based on consistency and consequences.
Top

I know he's pretty good with the ball but that 83 DA looks too generous for me.
Top

Absolutely deservers 95+ header, and 91-92 Jump.
From the world of darkness I did loose demons and devils in the power of scorpions to torment.
Top

...yet another winning header min 92...his sixth in the last 3 years? and third this season or even fourth?

He also deserves an upgrade in Mentality (90 would be ok).
Top Sergio Ramos defence 75?! Best defender of the world?!
https://www.youtube.com/watch?v=_aslq6fcMt0
Players(CB) in Seria B have 80 + rating for defence .....
Top