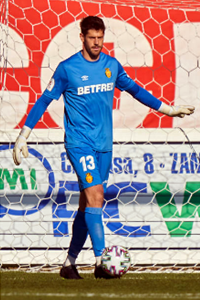 isn't his name and surname FABRI ?

Past season he got an insane amount of praise from local journos/fans and even national media. I'd say he's the walking stereotype of spanish goalkeeper, from head to toe. Nice reflexes, aggresive in one-on-one, weak in indirect set pieces, terrible at dealing with aerial balls. So not really a fan. I'll post the video when it's done, in the case anyone's interested.

Fabri seems to be new Óscar Córdoba for Beşiktaş fans' though. He's so fantastic with ball. He can control the ball more comfortable from many players. Many "foreign" (hasn't Turkey passport or did not grown in Turkey) goalkeepers play in Beşiktaş, since Córdoba's departed from Beşiktaş. Most of them defend the goal line and didn't start with ball. Maybe Runje and McGregor were similar of Fabri little bit. They are 183-185 cm tall and fast, agile and brave. But Fabri is more techniqual player from these keepers. His passes are accurate; he's got vision for sending to free players, looking for right position and right time. Also either feet are accurate same level. His left foot is very functional such his dominant foot. I've watched Beşiktaş's all games in this season. Fabri is a first option for playmaking from deep, second is Marcelo Guedes and third is Hutchinson. When his team fall back to defense, then Fabri comes off his line for passing the ball or controlling the ball. Sometimes he don’t give right decision for come off. That’s the big problem for defense. Also he’s enjoying play with ball. Didn’t play quickly for passing. Every time he’s wait for right time and sometimes he's very slow for this move. Especially if his opponents make agressive pressure to his defence line, then he can make mistakes but I've watch this landscape dozens of times. Fabri holded the ball very well when he's in this action. Sometimes dribble, sometimes make simple tricks with ball for escaping from opponents. His second best ability is handling. His handling is a characteristic attribute apart from his other keeper abilities. He's always wait right time and right position for catching the ball. And most of time he's succeeded. 1-1, long shots were repelled easily by him. His priority is catching the ball for clean sheet. Third and last best ability is jumping. My though his second best ability is this. Much more realistic his jump is 88-90, and He's 183-180 tall. For this reason, his jump ability isn't unrealistic about 90's. His best saves with the help of jumping and handling. That's the why his compare with only Cordoba. Techniqual, catcher and jumper offensive keeper. That's all my impressions about him.

Omg, maybe your suggestions for GK skills are good but Ball control and Dribbling 70+ ? are you crazy ?