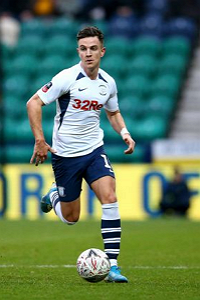 I remember him more from his time at Man Utd rather than Preston North End, but it seems like he is doing well there as well, if we exclude a knee-ligament injury last Season, and he has scored 5 goals already this Season. At Man Utd I remember people saying that he was one of the highest and most consistent performing players in the Reserves, but for some reason no manager promoted him to the 1st-team, except Mourinho in the end of the 2016-17 when he started him Vs Crystal Palace and he scored in his debut. Then in the Summer of 2017 Man Utd proposed him a contract extension, but as he was already 21 years old, he wanted to move somewhere else where he will be a starter.
He is primarily an Attacking-Midfielder but he can play in pretty much all of the positions of the Attack, even in Central-Midfield in some instances. However, his most frequent roles are Attacking-Midfielder and Left-Winger, but regardless of the position, he always like to find himself on the left-flank cutting-inside to his stronger right-foot, and taking on defenders with his dribbles before trying to bend one in the net. His Dribbling-Accuracy and Agility in my opinion are great, and his overall pace also good, and because of these he can be a problem for defenders to stop him when he has the ball at his feet, and also he wins a lot of fouls. His technique as a whole is also good, with his passing being decent as well, but as an Attacking-Midfielder Passing isn't his biggest asset, in contrast to Attacking-Midfielders like De Bruyne-Mata, but closer to the "Lingard" mould at Attacking-Midfield. Not primarily a playmaker or an assist-maker, but more of a runner at Attacking-Midfield who can unbalance the defence with runs with and without the ball. Finally, he is a very good shooter, with his finishing being decent, but his long-shots even better, and the same with his free-kicks.
Top
Post Reply
2 posts • Page 1 of 1