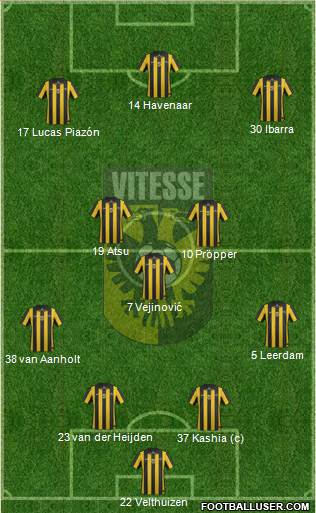 I know that was the preferred formation under Bos, although in reality he was limited by a few things which didn't quite make the line-up posted above the correct one.

Under the interim managers, Van der Struijk has played alongside Rajkovic (Sprockel has picked up an injury, I believe). Marcus Pedersen made his debut for Vitesse today, scoring twice, but didn't play before due to injury. Nilsson has been played as the striker most of time, sometimes being replaced with Pluim. Jenner has been appearing on the right, whilst Stevanovic has been coming of the left a bit.

I have a feeling the formation will change under Ferrer and Menzo though, so we'll have to wait and see for a while.
Buon compleanno, il pibe d'oro.
Top

can someone make Riverola? please
Top

You should create Renato Ibarra set, a player that is allways in the main eleven and recent call-up to Ecuadorian National Team

Vitesse doesn't play with a DM anymore, more like 2 CM's and an AM.

Yes Kakuta is definitely a starter. Yasuda hasn't played that much. They differ by more or less 10 matches.
Top

Yeah that formation is good.
It's true Havenaar starts more often lately. He can play at the position of Reis or Bony in this formation, but both Reis and Bony started a lot more times this season than Havenaar. Havenaar was mostly the usual substitute.
So the first post may be updated with your latest formation.
Top