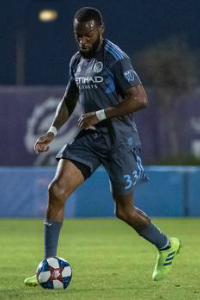 Was "USL defender of 2017" - often cited by the match commentators as there seems little new good things to say about him haha.

I think he was part of a back 3 in the middle/center before NYCFC, where he was a "great commander of the line". Patrick Vieira tried to get benefit of having another solid defender to try a new shape with the back 3, and he was okay, but results had them change things up and when they did play 3 it was Ring who did the sweeper thing. After Vieira left and Torrent came in, he tended to use Ibeagha more to close out games as a tactical sub or as deputy for the starters.

I never got to see him being some great backline leader, and the offside trap did not really improve with him there - probably better without him - if we are speaking in pure PES mechanics with that *D-Line Control ability.

Athletically he is solid and CAN be decent, but too much cutting and pasting in his appearances, he does not even get played in middle of the back-3 anymore when they play that, he gets stuck out wide and is worse for it (guess since Chanot struggles with pace, but to me it makes more sense to have Chanot wide, as he likes to engage early and break bones), Ibeagha more likes to cover up a gap and be the second man, defending 1v1 is not his strength. When Callens was away at Copa America, Ibeagha was in the back 4 and was poor.

His Agility has been deteriorating, or just many performances with him falling on his ass or unable to match a dribbler properly. His clearing ability is shit, hence the ST/SP, either it barely exits the box or there is a high probability of an own goal if the ball is awkward enough
Top
Post Reply
2 posts • Page 1 of 1