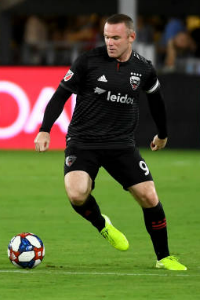 jurgens wrote:It's so good to see him play consistently as a more attacking mifielder, it's clearly (to me at least) always been his most natural role. But its somewhat shunned in britan so hes forced to play more advanced.

I've considered his natural position as an attacking midfielder as well. It allows him to contribute to the team far more than playing as a forward does. When he plays as the central forward it's noticeable that although he's a fantastic striker he doesn't suit being the most advanced and he will always drop back and leave the team without a forward especially when United play 4-2-3-1 and someone like Kagawa is behind him and this wouldn't be so bad if the team were to exploit that space with willing runners from midfield, but they haven't and it's cost them in many games when Rooney was deployed as the sole CF.

BTW should he have CM as well. He's shown himself numerous times to be more than comfortable in that role?

jurgens wrote:It's so good to see him play consistently as a more attacking mifielder, it's clearly (to me at least) always been his most natural role. But its somewhat shunned in britan so hes forced to play more advanced.

I'm not sure its fair to say the position is shunned in England, I just think that due to the sheer ignorance of so many English fans, pundits etc, it never came to light that Rooney would be brilliant playing from deeper, even though to me it seemed blatently obvious considering his skillset.
Top

Welbeck19 wrote:Any thoughts on a raise for LPA? He's been pinging Scholes-esque passes in most of United's matches this season and behind Carrick I'd say he's the best long passer in the team and I feel he's been more consistent with his long passes this season than he has been in previous ones? On another note he seems to thrive as an attacking midfielder more than he has as a support striker or out and out centre forward as he's contributing far more to the team (being the assist leader for the Premier League with 9 thus far is proof of that) and I believe he has 13 or 14 assist in total thus far in all competitions this season.

he's a crazy long passer, but he's so goddamn inconsistent, even on his best days he'll pull off a scholes pass one moment, and then completely flub the next. i'd say he's probably worth a little more, but i'm uncomfortable with pinning it down on a value, and i think this 87 lpa is a nice value to describe him.

Also he's become a talisman for the team, even when RVP was fit the team is noticeably weaker in Rooney's absence and even though he's not banging in goals like Suarez his contribution to the team is as important with his willingness to drop back into deep midfield role rather than be the head of the attack or to get back and act as extra defender if the situation requires it. Although he still lets his temper get the better of him at times it's not as often as it used to be and he's shown maturity the majority of times this season. He's truly been the heartbeat of United this season and they would be in a far more precarious position than they are now if Rooney had have left in the summer.

speaking of this, his TW can go up certainly imo, this isn't an inconsistent factor of his game, i find myself marveling that he looks borderline red TW when i look at his movement across the field sometimes. he's a bit careless in the full faculty of TW imo, but his general movements is worth more then this 88 he has, and i think at the least he can go to the 90 TW we originally considered in the big update made a few monthes ago.
If you don't put effort into your post, i won't put effort in my response.
Top

I can certainly understand your viewpoint on his passing as he is inconsistent in that aspect, but I think he's been a little more consistent in that area lately IMO and I believe he's got more on target than not this season when he's attempted a long pass than in previous seasons.

Also this is something I've been meaning to ask, but do you feel he would warrant the Talisman card as he does seem to bind the team together and the team is weaker in nearly every aspect when he's not playing?
Top

The match today perfectly showed the view that United are a joke without him and he is the talisman for the team, because that was possibly the worst I've seen United perform (yes worse than any time they've got a huge defeat). They made little to no effort in every department and if Welbeck hadn't have come on we more than likely wouldn't have scored, against a better team we would have been destroyed 4 or 5-0 with that performance. Also one of the worst points was trying to keep the ball in the corner for 6 bloody minutes instead of going for the win. What team in their right mind think that's a good tactic, because it was down right idiotic and reeked of a team afraid of failure. To be honest that team deserved nothing from that and it was quite simply a shambles and they better hope Rooney comes back against Spurs otherwise they'll be on the end of a hiding from them.
Top

Moyes uses him like playmaker (doing all passes from back etc), so maybe DMF or CMF position should be added...
Top

You don't need to be a DMF/CMF to play in a playmaker role.
His default position could be switched to AMF instead.
"Willy Wanda is Chinese!!!"
Top

Maybe a form raise to 5-6 wouldn't be a bad idea, he is the engine of the team and I think that he's been that consistent to deserve it.
Top

His form needs a raise urgently!
It's easier to win when you only need to score once.
Top

it's going to take quite a long run of solid performances by rooney for me to even consider raising his form, every time in the past people have asked for a form raise following a good run of performances, he goes cold for 2-3 monthes.
If you don't put effort into your post, i won't put effort in my response.
Top

But hey, what about his tendency to always have such a great disposition in a greater part of the games he plays?
It's easier to win when you only need to score once.
Top

That's why he has high values for both TW and Tenacity.
"Willy Wanda is Chinese!!!"
Top

He doesn't deserve ts 85 any longer, and it's been a while since he was that fast. Januzaj is considerably faster than Rooney with or without the ball - there are so many examples of this such as Januzaj showing he's as fast as Richardson while Rooney couldn't keep up with him. Also, is response too high? I think he takes too long on the ball and is too sloppy when receiving it.
Top

we should think about increasing the Ball Control for the rooney 90 he now runs with the ball moving faster to your foot, another thing that should increase and it Swerve 90, I see the curves that he not only puts in more fouls also in corners for min's he doing to deserve 90 in Swerve.
Top

Nice run and pass that eventually led to Van Persie scoring his hat trick from the free kick.

Surely he's got to warrant a higher TW value than this? His movement around the field is world class and I don't think there are many in the world at the moment who are better than him in this aspect. If you watch his movement in a match he is constantly on the move making small, intelligent movements to create that space for himself. I would suggest 94.
I also think his LPA deserves and upgrade. He has become a lot more consistent this year with his long passes and when he's on form they are incredibly accurate. I suggest 90/91
Top

olliewab wrote:Surely he's got to warrant a higher TW value than this? His movement around the field is world class and I don't think there are many in the world at the moment who are better than him in this aspect. If you watch his movement in a match he is constantly on the move making small, intelligent movements to create that space for himself. I would suggest 94.
I also think his LPA deserves and upgrade. He has become a lot more consistent this year with his long passes and when he's on form they are incredibly accurate. I suggest 90/91

Agree with your TW. His long passing shouldn't be 90 - he's far too inconsitent; he's very far from Scholes' level.

I think his technique should go down actually - his first touch is far too inconsistent. Today it was terrific though, such a hard man to give stats to.
Top