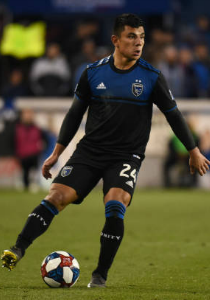 https://youtu.be/nRq6x6y_0zk?t=11 Goals, Skills, and Highlights
https://www.youtube.com/watch?v=Q4jz5reopAQ vs Panama NT debut - note the end at 90 mins in game, he wins the ball stopping a counter and supplies the cross for a goal - Rooney vs Orlando style

Done some inverted fullback work for San Jose in some matches, in that vs Panama vid, Berhalter just gave him complete license to do his own interpertation of the fullback role. Crossing can be very dangerous when it stays in play - haha maybe could be a little lower LPA - very difficult to clear them. He has an astounding shot on him at times, nothing fancy in difficulty, just an ability to pick a corner and laser it - SA and SP might be a little underrated. Can be a very proactive hunter in the mid and press and chase down, but in his own box can lack some reactions to loose balls/sloppy passes near him - Response is a balance between the 73+ and 67- in my head for each respective zone. Overall a smart player in his support play in possession and migrating the ball into the attack, is not very flashy, more a workman/small bundled powerhouse able to force his way on the wing - touch is too loose at times in congested parts. Can be exposed 1v1 with a player who accelerates well/plays stop-start/twists, otherwise is reliable if not stellar defender.

EDIT his FreeKick Accuracy, that 72 value was in there for a while, I cannot recall if I had seen him take a freekick and really nail the target- my mind is blank on it - just that it was in my OF - never scored one. It might be mistake??? meant for someone else? I just can't recall, need a loyal Quakes fan to comment. I might just drop it to 67 to be safe.
Top

https://youtu.be/iEYHaB0uTXY?t=192 nice finish - good build up before this too by Lima, var called it off for tiniest offside in build up
Top
Post Reply
3 posts • Page 1 of 1