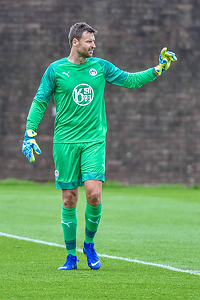 His KP is way underrated. His goal kicks are quite powerful and remind me a bit of Ben Foster's.
KP could be easily in high yellows (88).
"Willy Wanda is Chinese!!!"
Top

they should build a statue for this guy at the main square in cardiff, if it weren't for him tottenham would've scored at least 4 goals...

always found his konami set interesting, and I wonder if it can be used. trying to sift through footage to get to know him... hard though, very little footage available.
If you don't put effort into your post, i won't put effort in my response.
Top

to be honest never looked at it before but I'd say its a good set, I happily update it
Top

https://youtu.be/1E_XfRnlrKU?t=478 great goal kick - not first time this season his distribution reaches past half way line and starts a counter, his long throw was also at work on another occassion.

I was going through Hull highlights since start of 2019, I have to say that I think his Reactions are no longer orange level, a few goals were slightly deflected balls slowly dribbling on net and him failing to do anything just caught wrong footed and watches the ball. Also a couple other goals of corners where the ball was knocked in near his frame, but he just failed to react/reach out an arm in anyway.

Also his BB at 85 seems too much, he failed sometimes to deal with players standing their ground in the box when coming out to collect a ball and would spill - one was a goal (I forgot which match).
Top
Post Reply
7 posts • Page 1 of 1