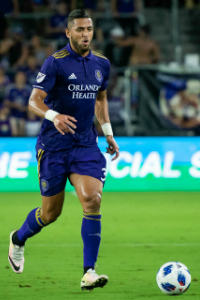 I thought he was decent CB when I watched him, he does all the small things right, Sane could be more flashy in the way he would win a ball and start a transition immediately, but he he also messed up more, Tarek seemed more conscientious about managing the ball and not letting it spill into midfield for a turnover or making sure a crosser did not get a second chance to cross - instead of a throw in. I did not actually realize the level of his slide tackling until reviewing footage of him - I did not get to see him consistently as Orlando rotated CBs, seemed he was better than your average MLS defender, it seems to be of a very good level. I was actually surprised Egypt did not take him to WC, I think he was on preliminary squad but got dropped (*slide whistle*).

His weaknesses are his ineffective use of strength, does not use that massive hulking frame anywhere near what he could do. His aerial ability is shite, I am not sure if he can actually jump with all that muscle, could be lower value, like low 60s, he does not really jump for the ball, either its at head height or he'll stoop to head it, but you rarely see him try to engage in the air to win something high. He has lapses in concentration and can mess up taking care of the ball or minding a mark.


Otherwise has a lot of good qualities. I think Red Bulls have signed him, he will make a great alternate, or even starter if they sell one of Parker/Long.


Overlapping as left CB of back 3. Otherwise should not have the Offensive Sideback card.

above vid shows his Strength on ball is not great despite his physique:
https://youtu.be/2pArXgJHPCM?t=97 Martinez (84) can knock him off the ball/looks shoulder to shoulder, https://youtu.be/2pArXgJHPCM?t=802 Not handling Kei Kamara (82) very well whilst sheparding ball. Just generally I see him not being a physically aggressive CB like the Red Bulls duo of Parker and Long are, Tarek is far more a precise interventionist. He sometimes struggles vs some forwards as he does not want to give a way a brutish foul, so he will try to corral them to where they can't do anything on the ball, rather than immediately go for the ball with a full tackle or try to force them off the ball.


https://www.youtube.com/watch?v=5x0EUX8iNuI Left Winger at Wolfsburg II highlights (some Freiburg at the end). They used Amro Tarek as emergency CF in Freiburg, scored no goals, I guess cuz he is tall??? transfermarkt also says they played him as AMF 4 times?? Right Wing twice ?!?@!?!? This was back in 2011/12..Was used more recently as a LMF and the last time was once last season in 2017 at Wadi Degla. Why da fuk are these clubs playing such an excellent tackler in these spaces? I guess the becoming a defender was later in career.
Top

Also made a nice clearance of a dangerous cross that would have been a tap in. Defensively his interventions have been really good filling with Long out injured, some communcation and passing errors, but also getting more forward in Red Bulls high line and showing nice touch.
Top

Updated a little. Unfortunately his body keeps breaking down this last season - for me he has the ability to be one of the leagues best defenders, if he can get a full season under his belt.
Top
Post Reply
4 posts • Page 1 of 1