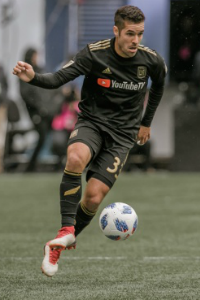 He sometimes does these scooped passes over a row of players, it's not really weighted pass but has similar effect as ball drops mortar style and kills itself dead on the other side for recipient - I don't know if there is a special card for that..maybe I should add Weighted Pass? His long passes are more dangerous due to this excellent measured curl he manages right at the tip of the cross/pass there is always this crazy dip/dive of the ball to foot level - would not want weighted pass to be something he does instead of his trademark pass, if I give him that card.

In general about him, a fancy grade American playmaker (born in Brazil probably got infected by joga bonito

) he was having his best years in 2014 and 2015, but Klinsmann was USA manager at the time and for some reason despised Benny (I think its cuz he is a filthy jew and .. well Klinsmann is a nazi .. I digress), he was omitted from USA's team and only in 2017 did he get a callback but was on a downward trend. This peak of his, came after a European stint, so he sort of remained in the shadows only known in MLS - I personally did not know of him till this season when following LAFC. This guy is a gem of a player, was a pure AMF earlier in his years, but has been adding some steel and defensive qualities to his game with age, now is a fairly competent tackler, and covers spaces well - though not a natural enforcer.
Top
Post Reply
2 posts • Page 1 of 1