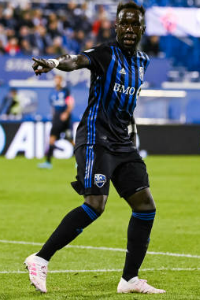 Tough tackling and physically strong French defender, new signing from Auxerre during the summer. Versatile player who usually plays as a right back but can also play as a left back, centre back or in the midfield. Sagna has made 38 appearances for the French under-21 national side and has recently been called up to the French senior squad for the first time. His reputation is growing fast and has become a key player in the defence for club and country.

A broken fibula, according to sites.

Sagna looks foreseeing what nonsense will make Adeba and ignore it in advance.

Sagna's long pass is very poor and therefore long pass speed and long pass accuracy should be 78 and 75. His sense of defence is weaker than before.
Top

IVANSZE2010 wrote:Sagna's long pass is very poor and therefore long pass speed and long pass accuracy should be 78 and 75. His sense of defence is weaker than before.

Sagna's cross accuracy is good imho... the thing is that he don't tend to get in good positions to make them, so, a lot of them are intercepted..., an that has more to do with some others skills (Seepd, Dribbling, Attack and his style...) . He don't throw them from the byline...
Top

Kruger13 wrote:Dont think he is a kind of player that deserves COND 7 - I would say that even a 6 is a bit generous for him. So 5-6.


I agree.
and I want to add that he was awful tonight vs Arsenal, and he wasn't much better in recent games that I saw
the elastico master
http://www.youtube.com/watch?v=LXqPEpeokCg
Top

lol, i was reffering to game vs Liverpool, typing mistake

I was about to write that his good days are behind him and then I saw him play at CB.. A beast vs sunderland, better in aerial duels than all our defencive players so far (giroud is on an other lvl, he is an asset in defense on set pieces). Strong, determined and well positioned.. Indeed it was only a game but I was shocked by his performance.. We might discovered a way to end our defencive problem, cope with sagna aging and suspect crossing (at the last games)...
Top

Just a note i take from him against Germany was that he was slower than Podolski in all the game, with/without the ball.
...U dared to enter my world...

thats because Podolski speed stats are way underrated , they should be back where they were before the updates
Top

really? well why didn't you say so when i did it? some people had in fact said that his speed stats were too high, i watched several vs vids and followed him for a match or two and adjusted them to what i saw. i think they are perfectly fine speed stats now, but can you show me instances where he's been faster then how he's rated?
If you don't put effort into your post, i won't put effort in my response.
Top

vinnie wrote:really? well why didn't you say so when i did it? some people had in fact said that his speed stats were too high, i watched several vs vids and followed him for a match or two and adjusted them to what i saw. i think they are perfectly fine speed stats now, but can you show me instances where he's been faster then how he's rated?

are you reffering to podolski or sagna?
Top

i was responding to furymaker, so i was referring to when he said that podolski speed stats are underrated.

as I wrote at podolski's thread I also stated that it seems harsh as well.. Also his DS seems really harsh, he can run without loosing much speed with the ball at feet.. I think those stats along his shot accuracy were affected not by the ladder but from how those stats reflect the player in pes.. This is the same problem with walcott (needs higher bb) , sturidge (needs higher SP) etc.. They can be really good with their realistic stats and ppl underate them to fit their inconsistency and bad decision making.. (not clearly the poldi case, he is lazy sometimes and lacked full fitness for long)

Anyway this is sagna thread, who was a monster of CB at last game. Konami knew when they had still CB at his available possitions at pes13!
Top

vinnie i know you did , i didnt said anything when you did it as i didnt have anything against him as he didnt look as fast as he did at koln , but watching bit more of arsenal games he just seems faster than start of the season , he probably wasnt fully fit at start , ill try to find some clips later to show you .
and about Sagna he was beast today , great positioning , strength and determination , but i would be against giving him CB
Top

Is he really this good anymore...? Not sure he's ever been technically that good anyway, at least not deserving of greens for things like Dribble Accuracy etc Always thought he was just an average, clumsy player but with a good engine and good physical characteristics.

I struggle to come to terms with him being 10 or so points higher in Defence than a lot of Premier League full-backs too.

my thoughts on him

He's quiet of the pace the past couple of years, probably a result of the injuries, used to be one of the best in the league in both offensive and defensive aspects, but now meh average, good some days, terribles others. Offensively he still got some of it left in terms of intelligence just hasn't got the consistency in his passing to be the same threat. Defensivly he got a lot worse, used to be solid, now always looks like theres a mistakes in him, never looks fully in control. Physically he has delcines as would be expected with what two broken legs I believe and age.

I also say to cut him his left foot if possible.. Lol, the fact that moderators spank newcomers and others for posts in the template: (My thoughts for .... Is acc 44, tech 105 stamina 1221 st 5 etc) is hilarious when you see the above post.

On subject, Sagna plays in a way closer to a cb that Plays at sb and this is because it lost his Somewhat his touch stamina and creative ability.. His power jump and awareness is still top notch..
Top
Post Reply
161 posts

Users browsing this forum: No registered users and 11 guests