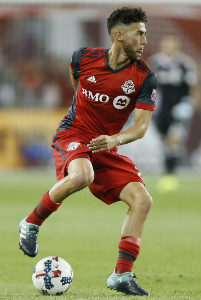 This is a good set, it is still accurate in many areas (assuming it has not been updated since 2013).

Some possible changes I would make are
Attack: 74 Good movement in attack, danger maker with the ball and knows where to be off the ball
BB: 76-77 Stronger than Armando Cooper, resists duels well
Acceleration: 76
Response: 73-74
Agility: 84
DA: 83 It's his best skill, he has good close control and can dribble between 2 players - he does not have meaningful pace, but rather a slow steady approach combined with strength and wriggling free of his marker .. https://www.youtube.com/watch?v=XA0DFgc1u5U
DS:76
SPS: 68-69 His combinations on the ground are one of his main features but his passing range is poor, is accurate and with slick interchanges but his passes are also intercepted by defenders due to a crap pace...er slick in that they are good ideas not 'speedy' passes.
SA: 68 Actually has scored 6 goals thus far (his best season I think), but he just seems wasteful and a terrible shot on occasion - I may be a tad harsh with both SA and SP being dropped..I mean his placement on goals is good into corners not just blasting through the keeper...but I found this https://www.youtube.com/watch?v=5B7eAtwyAqU right through the keeper, argh My FAILING MEMORY!
SP: 77 His goals seem to come from inside the box and efforts from outside are tame even for MLS keepers
TECH: 80 I find his touch poor at times (like low 70s) and is definitely worse than his dribbling
TW: 75 Really good understanding and linkup plays are his strength, he works for the team with off the ball movement, his solo dribbling is used only to the effect of drawing in players to slide the ball into an empty pocket

WFA: 6 he favours his right mostly, but is equally capable on his left

http://matchcenter.mlssoccer.com/matchc ... nion/recap @ 2:17 mins is typical of how he plays (sorry MLS copyrights video so little on youtube)
Top

Gave him an update, watching him more I was both wrong and right on some of my previous thoughts.

He lost his starting berth when Vazquez was signed, there is a gulf between the two that the Canadian cannot match and basically became the back up playmaker - competing even with Chapman. Osorio actually seemed to sort of regress this season, he played within himself and was losing his killer passing, I dropped Form to 3 on account of his uneven performances. Delgado over took him as a favoured midfield option, the two were very similar a couple years ago in my eyes, Delgado though has grown and worked on parts of his play, much more involved in the defensive side and an okay tackler (aside from that red...). Osorio was always a very talented dribbler and passer, yet a bit stagnant and not really progressing much in the same time span.

https://www.youtube.com/watch?v=g-q9lGWxa88 - A 20 min highlight reel of him over a few years.
Top

This schmuck, now he is playing so well that the form 3 is harsh, fine for last season, but he has been inspired or something this season, also for Canada in a friendly vs NZ he was "bossing" the mid (lel). Showcasing a bunch of skills, he is not some great footballer, but maybe finally bringing everything together and being a complete player. More defensive workrate and effectivness in tackles now, his energy levels have been solid and probably worthy of 80 at least, maybe a bit more heading is due.

Vazquez has been missing for most of this early season from some back problems, Osorio has almost filled that void, which says something because there is a clear gulf in ability, but speaks to how much Osorio has stepped up in many big matches early in the season, most often in CL, 3 goals now.

He has some weird hairline transplant thing going on - irrelevant, just distracting.
Top

Gave him an update, reflecting his improvements this season - the main thing being his defensive contribution and effectiveness has greatly improved, better tackler than Delgado now and probably more reliable in the defensive phase.
Top

https://twitter.com/torontofc/status/10 ... 4868236289 15th goal in 31 games, fantastic season so far! He is finally living up to his potential, the spark that has been there in flashes for years is actually a little campfire now haha. With Vazquez's injuries problems he has really helped the team, not through playmaking but his late runs from midfield and poaching ability - where the hell did that come from!? Completely new dimension to his game, his Shooting Accuracy has been insane near 75% of his shots on target, yeah mostly from inside the penalty box but still his shooting seems a a big level better than past years.

Last season on his contract, TFC are trying to resign him, but apparently he is being courted by other foreign clubs - would be great if he stayed, but if he does not slump back to his past level after this year and keeps this level up he can succeed in Europe (Bundesliga are the rumours).

Has had personally his best season, think he is now on 20 goals overall, filling the Vazquez hole not through playmaking but rather morphing into some sort of shadow striker from mid, been doing late runs or being in the 6-yard box waiting for dem tap ins.

The SA might be overkill, he tends to shoot only inside the box and not with any more precision than Wright philips, but he also seems unwasteful this year, think he had near 75% shot accuracy when he was on 15 goals for the season...maybe the tap ins are over inflating this and I am over valuing it.

The Attack I am torn on, his contribution outside of scoring and in general play is the same as last season, his whole danger package is only these runs into the box, hes just able to lose defenders and with no physical power find space, is there some new gen PES card I am missing for this? Free Roaming I think is similar to *Reaction which is guy looking for balls over the top/getting offside, which is not him...hell I dunno he just might be mid with *Scoring but a lower Attack value of 75ish ... its like he picked up Morrow's bug of last seasons.
Top

To me he has changed/evolved as a player since 2016, when he was an erratic player who had his moments but never really lived up to the skill he could show. 2017 he was crowded out to the bench by Vazquez and the good form of Delgado, Cooper too was more useful. But in 2018 Cooper was gone, Chapman more the understudy, Vazquez became chronically broken (back issues), Osorio needed to fill the void, he did, but not in a creative capacity - to me he regressed here (still good on 1-2's in around the box) - it was his unexpected surge in goals that helped the team immensely, all the forwards where getting injured and the reserves under performing. Osorio developed this great nose for goals, just being there where the ball would magnetically find him in the box ... it must be something Vanney can coach into his players, Morrow too developed that "johnny on the spot" ability, despite not being a forward.

Anyways last season was best of his career, I think it was 18 goals in all games, Champions League top scorer. He also added a very good work ethic of helping defensively in his own half and became a better ball winner than Delgado. His main problem is his weak physique, he is not strong and might be lower BB if the form was any more steady, he's also slowed down in my eyes - and he is only in his late 20s! But his brain has become much better, and really TFC have been a slow pedestrian/cerebral team for years, so he fits the system, but it can be painful as to how slow the team is in transition - this was particularly seen in CONCACAF CL, where zippy Mexican teams ran circles around most of TFC's players (happens in MLS too but less often) but was more visible vs higher caliber opponents.

Some Colombian manager/team was interested in him for their 2019 Libertadores(?) campaign, TFC instead managed to get him on an new deal as he was almost a free agent, also heard rumours of some Bundesliga teams - nothing material - but I think he could succeed abroad, his skill on the ball has always been there, its just been his motivation/Form that has stalled him being more recognized. Still zones out too often from large stretches of a match, but has a knack of getting winning goals in random moments ... its almost as if he is lulling opponents to sleep with his ineffectivness, only to do pop up with a goal hahaha ... 4d chess.

I lowered Attack from the 79 I gave him for 2018, instea d placed him at 72, very good for a mildfielder in MLS, and thats him, nothing more, doe not need to be special there - too often absent in not making an impact - instead gave him *Scoring for old gen PES, for new gen I have no idea how to replicate a CMF getting in the six yard box late and acting like a poacher? *Positioning too, since he makes the space when the real forwad is at the tap in spot, he drops back to be the option.

The scoring trend continues into 2019, hope he keeps it up till WC 2026 .. he'll only be 33 and he already has the physical prowess of an old man

He was later subbed out because he collapsed from heat exhastion, it has yet to reach 20 C in Toronto this year, but in Orlando it was 32 C and 80% humidity from a thunderstorm earlier in the day, Pozuelo also was cramping by end of the match - not enough fluid in the bois. 5 mmatches in 20 days, drink up judah ben hur.