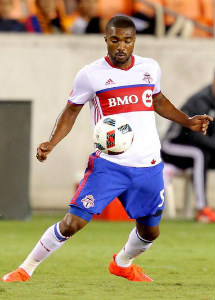 thanks for making him ballack13

I will update him as I see more of him, these stats are very conservative as I've only seen him twice.
Top

Gave him an update.

Plays infrequently now since Morrow's become probably the best WB in the league, Morgan has also had injuries each season for the past three years, making him a ghost.

He played a bit this season, and all I could really gleam was that if he had that pace he was rated with before (TS 85/ ACC 86), then he no longer does, nothing special over distance, still decent at bursts when tracking players though - aids him in his defensive work.

His passing game seems better than the previous values, he can engage in neat interplay on the ground with semi-penetrative passes. His crossing though has a very loop/slow quality - they often hang and arc over the first defender - needed a LPS drop in my eyes to get the effect.

What is Low Lofted Pass in PES 2016? He sometimes does these driven crosses at an awkward midriff height, difficult to clear, and need just a touch to become goal bound.
Top

Had a really good game in the first leg vs Club America, was solid in his tackles and helped to create the 3rd goal; https://twitter.com/TSN_Sports/status/9 ... 0636040192

Not as outstanding individually in the second, but solid over all, thankfully as Morrow has been injured for a bit now.
Top
Post Reply
5 posts • Page 1 of 1