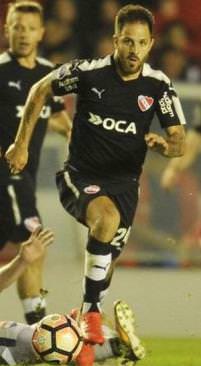 Actually I didn't say he doesn't deserve red da, I said it wasn't probably the best time to update him as he has been crap since he came to Boca from Corinthians and he didn't show it at all.
Top

Jorge why do you always have to be such a dick when you disagree? why?

Edit: and on his days, yes, he is a better dribbler than most you mentioned.

Despite disagree in the decision of raising right now his abilities, this is quite the opposite of the old PSD...a southamerican player who plays in Argentina wouldn't have such high stats back then.
Top

Well, we all agree that it isn´t in his best perfomance . But it is undeniable that when this guy it´s in his better level is one the best in Argentina. I believe these stats with Form: 5 and IT:C is totally ok.
Top

chamakh wrote:Well, we all agree that it isn´t in his best perfomance . But it is undeniable that when this guy it´s in his better level is one the best in Argentina. I believe these stats with Form: 5 and IT:C is totally ok.

I agree with you. I always thought (and I'm still thinking it) that he deserves the 95 in DA. I know that nowadays he's not having his best performances, but today against Belgrano (in the minute 20 of the first half) he dribbled 6 players of Belgrano in the same play showing insane dribbling accuracy. I think that lowering his form is the right thing to do, and maybe his speeding stats could be debatable too. I also noticed today a not so good balance, but I will look at the next games more carefully.
Top

people might get the sense that you can abuse a player with stats like this.. but can you really?

to me this is just.. pretty stupid.

he's NOWHERE NEAR as effective, as ANY of those players, the only superiority he has is a little bit more control, and in some cases (only some), more agility, or dribbling speed.

and lets not compare him with ronaldo at his prime as a dribbler huh? 06/07 ronaldo? when he was an ACTUAL DRIBBLER. that would be a complete massacre.

neither have i recalled aguero really being reputed as a dribbler player, though he does have beautiful control, lets look at the head to head.
Martinez +4 DA, Aguero +2 DS, Martinez +3 AGI, Aguero +4 TS, Aguero + 10 ACC, Aguero + 10 BB. he's fucking far more powerful then martinez, and thus, far more effective at shileding the ball and exploding away, and really then, a 'better' dribbler then martinez. he's decisively superior in two of the most important physical stats pertaining to dribbling effectiveness.

i don't even need to hand walk you through ALL these comparisions, its fucking easy to see 1) how more EFFECTIVE as dribblers every one of these players are then martinez, and 2), how fucking stupid the players you picked to compare with. Ronaldo? zlatan? fucking tevez? great dribblers, but if we talk about control, martinez shits on them pretty easily.

they aren't even close to him in DA. THEY WERE ALREADY BELOW HIM IN DA when martinez was at 92, yet you didn't object then, so clearly you see the package value of what a dangerous dribbler is, being fast, powerful, agile, and having good control, maximum effectiveness designed on all of these traits to be as effective as possible. but now you think comparing him with 90 DA dribblers is at all appropriate?

lets go back to looking at martinez's abilities and what they entail.

and his control is almost every inch 95 da to me. just numerous examples in all the vs vids i watched. no need to list them, they are plentiful. diego is right to me.

i had decreased his acc to 84 from 86 because i noticed this in him, he doesn't have such a great burst that he can leave someone for dead with a good step, no, he builds his acceleration with a very good, consistent, and progressive rate. it is quick. it is not undefendable. he relies alot on his control to create the opportunity to have the postural advantage when driving through, as well as good enough body balance to withstand the chance of a turnaround body check (which is a risk since his acceleration is not good enough to completely escape in most situations). what he has is a averagely good acceleration. averagely good. not average. averagely good. but not remarkable. it is good enough to more then get a positional advantage, and his body balance is good enough to withstand the majority of physical pressure (though not infallible like a rock, he can be caught be physical challenges). he is very very quick in shifting his body and changing direction, very slimy and clever, very much like iniesta to me at times:
http://www.youtube.com/watch?v=balH-RoVPTQ&t=3m35s

he does tend to seem to be caught out after trying perhaps to dribble for too long. with such abilities as he has, this isn't really a crime to me, in many situations he was poorly supported and had arguably, little choice. not only that, he lacks the pace (combined with his, to me, pretty great and fluid ball carrying pace) to be unstoppable on the long dribble. he seems to be caught in many very tight situations with very few if any gaps, and very cordoned off options for attack.
BUT when does get that attack, his qualities means he can usually capitalise
http://www.youtube.com/watch?v=balH-RoVPTQ&t=4m38s

i think this set, makes it look like he's overpowered, but in fact, both captures his abilities accurately, and depicts him, when you examine closely, exactly as he should be.

why is it, believed that he is so unbelievable with this set when hes just a really lesser iniesta or silva? he lacks the killer ball, the scoring threat of someone like robben or aguero, the pace to leave defenders for dead (despite his speed on the ball), the strength to bulldoze anyone over repeatedly,

you don't have a good enough burst to start stop and continuously recreate opportunities to outfeint your opponent. you can't rely on just rounding your opponent, you're not that fast, you have to use your control to manipulate a situation to make a hole to dribble into, beat your opponent with control. consider this in a stagnate match up, where you are in neutral attacking zone, and the opposition defence is set up... just how effective can you really be by yourself..
you're not strong enough to withstand multiple challenges, good enough for one or two shoulder to shoulders, but not enough to retain complete balance, not to mention the danger of being knocked over in the majority of situations head on.
you're fast enough to really be deadly on a one on one or a breakthrough, but not fast enough to just messi through a crowd. either off the ball or on it.
or strong enough.

you don't have the passing deadly accuracy and range that would make opponents very wary of other threats due to your passes, and potentially have your opponents be more preoccupied with the danger of runs for your passes, and allowing you more space and chance for creativity, and opportunity to dribble, or even just to capitalize on your dribbling's effect.

you don't have the shooting from range to be deadly from a distance (though very clinical in close range).

what you have then in martinez is what i consider to be very accurate of him as a player in real life:

very fun to use, great to dribble around with, quick, agile, deft and delicate passer with delightful little chips and moments of magic.
but also limited, and someone who should be used cleverly, to maximize effect, rather then being abused or solely relied on.

vickingo have you stopped recording him? i'd like to see what qualifies as his poor form.

That was a really awesome post vinnie, thank you very much, nothing to add really.

vinnie wrote:vickingo have you stopped recording him? i'd like to see what qualifies as his poor form.

I didn't really understand what you're answering me vinnie. He played yesterday vs Belgrano and I could watch just the 1st half but I heart he surpassed 6 opponents lol, he waited my lasts posts to challenge me. I'll see if i can make his comp vs Belgrano.
Top

vinnie wrote:vickingo have you stopped recording him? i'd like to see what qualifies as his poor form.

Vickingo wrote:I didn't really understand what you're answering me vinnie. He played yesterday vs Belgrano and I could watch just the 1st half but I heart he surpassed 6 opponents lol, he waited my lasts posts to challenge me. I'll see if i can make his comp vs Belgrano.

I think that's about you making compilations of J.M Martinez's matches
Top

Great Dribbler but not an intelligent player, not at all.
I hope someone update cangele, as soon he starts playing more often, burrito is not the only world class dribbler in boca.
Top

Yesterday had a great match..
and since he arrived to Boca, he had a slight improvement in TW
i think he deserves more TW due to his enormous effort in midfield.. which sometimes he does appear like a AMF more than a SS

He's gradually raising his level, it seems he's backing to his Velez level.

Here you have his compilation vs Rafaela, he showed crazy stuff...he was the motm, over Riquelme:

why can't I start these vids from the right time? Anyone else have the same problem?
Top

jurgens wrote::x why can't I start these vids from the right time? Anyone else have the same problem?

Yeah it's sadly common nowadays...not sure where is the problem...still is worth to watch the whole vid.
Top

jurgens wrote::x why can't I start these vids from the right time? Anyone else have the same problem?

Yeah it's sadly common nowadays...not sure where is the problem...still is worth to watch the whole vid.

Reason: fixed the links for you marrufo, you gotta take out the "feature=player_embedded" from the url.

This is the "Sombrero" isn't it?
Top

He definitely recover the best performance. The Velez level.

Really good match , His DA is insane he always win to the rivals with his DA. He showed a good LPA in the first goal of Boca.