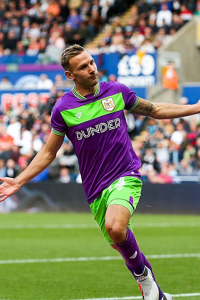 Shows how good my memory is, I could have sworn this guy was a little nippy player

well he's definetly no midget, he's listed almost exlussivly as 188 (cept transfemarkt where he's 179) though my height sense suggest the truth is between the too values, I would honestly put him at 182 but that would be a complete guess

and yeah TS should go up, first draft I had him at 87, and acc should have been yellow with a green agility
Top

I would have said he was shorter than that too. I know these photos are never an accurate way to tell but Darren Bent is 181cm :- This makes him look about 180 cm tops.
Top

this stats doesn't show his ability in realism. he has a great attacking sense, good reaction and he is much more aggressive.also he has good linkup+1st touch. few cards such as reaction and free roaming are also on the cards.
vamos arriba la celeste !
Top

I suggest his RES and ATTACK to be raised to low yellows.
At least that's something.
Top

Bump.
His agilty deserves a raising.
His stamina quite higher than 74
And I think he deserves Darting Run.
Thoughts anyone?
Top

Doesn't anyone on this site support Aston Villa or watch them at least?
Anyways, I would go for 83-85 stamina.
Or something around 82. He finishes matches quite often but he doesn't run around a lot.
EP should be around 82-85 maybe? I haven't seen a lot of him twisting and turning so I can't really comment on this.
And his DA should be around 81. He's not that bad at controlling the ball.
And his attack should be around low yellows. He's quite good at getting into dangerous positions.
And goal poacher anyone?
Top

I saw his darting run on the right side of the pitch in the 62 min of the match vs QPR in which his TS looked better than the current value, more like 86 tbh. ^ U saw that one?
The parable of this world is like your shadow - if you stop, it stands still, and if you chase it, it distances itself from you.
Top

given him an update
Top

He still seems quite underrated on here.
iMO the best player besides Benteke
Top

RE: Height
There's a lots of contradictory info on Weimann's height. The official Villa website has him at 188cm, which was the initial figure on here. Clearly wrong. That's been revised to 182cm, somewhat arbitrarily, but closer. According to several reliable sources (http://www.transfermarkt.co.uk/en/andre ... 49693.html / http://en.wikipedia.org/wiki/Andreas_Weimann), he's 179cm. That looks bang on.
@mrayamgoreng_12 - yes, big Villa fan here.
Cheers
Dan
Top

He had one of the best chances of the game during the 15th or so minute when Lowton's clearance bypassed the whole West Ham defence, leaving Weimann to run on to a loose ball in the West Ham half, but Morrison made a really great recovery run and managed to muscle Weimann off the ball. Speed wise he is pretty lethal, I see him at around 86 for both TS and ACC, the difference between TS and ACC is just minimal.

I've noticed for a while now that his best work is truly done off the ball - Villa really lack penetration when Weimann is off, they miss the pace, aggression and timing that he offers even if he isn't exactly clinical in front of goal. To really replicate his off the ball movement he needs a much higher STA (somewhere around the mid 80's, maybe 84 or so), and probably Reaction and Marauding, too. Not relevant to the whole off the ball thing, but he needs higher EP too, definitely a nippy player.

I haven't seen anything which justifies these passing values so far, and he might need a lower BAL value... Today he looked like a real featherweight whenever he was being pressured, can't see him on a green value.

Aw 3/1 and no Track Back? C'mon.
I mean, he's far from being a prolific striker, but it's quite obvious his defensive contribution is quite important for Villa whenever he plays.
It must be 3/2, he even looks like 3/3 at times.
"Willy Wanda is Chinese!!!"
Top

Playing today as an advanced CM in a 5-3-2 formation for Villa (against Man U) (and he's done it in the past).
http://www.uefa.com/memberassociations/association=eng/domesticleague/season=2015/matches/match=200130982/live/index.html
http://www.football-lineups.com/footballer/42993/

I'm also of the idea that his Stamina is kinda underrated. His workrate is really one to watch for being a forward player. Actually it's one of the main reasons he can play in several positions.
"Willy Wanda is Chinese!!!"
Top

Originally I had some notes on him that got rolled back. He’s fast, but has terrible acceleration, has good passing, and good movement. Finishing is solid. Dribbling is meh. Don’t feel like going too much further. Going to repost the proposed numbers below.