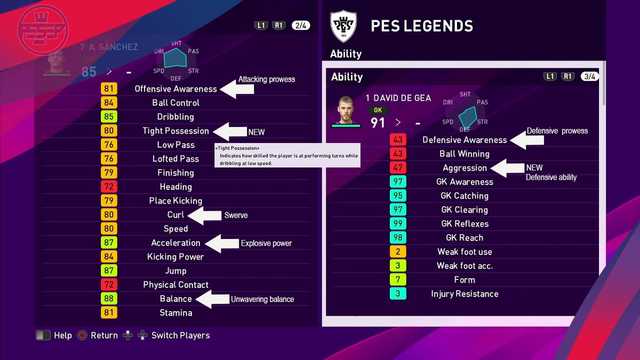 I think the first thing worth noting here is that Explosive Power has been renamed to Acceleration, which all but confirms my growing suspicion that EP should be rated purely as acceleration from PES 2014 onwards (though I've only played 2019). From my experience explosive power does have an effect an a players agility though, but the fox engine is "sophisticated" enough to use the actual build of a player as a determining factor of a players physical attributes in a way the the PES games of old werent .. i.e. a player with high-ish Acceleration/EP like Gareth Bale doesn't feel particularly agile in game, so for the most post high acceleration/low agility players are replicable, though there are notable exceptions as many players of this mould aren't necessarily big..

There is an off chance that the attribute itself was renamed because it functions completely differently in pes 2020, but in all honesty I think that is unlikely.


Tight Possession is now a new attribute distinct from Dribbling, I like the sound of this change alot; at first glance control seems to essentially be an equivalent of the old DA, but a more literal interpretation could imply that agility is also a factor..

This also helps emulate typically effective dribblers who don't necessarily have the best DA in PES terms (Douglas Costa and Mbappé come to mind), I'd imagine that the dribbling attribute as it will be could be rated similarly to the old DA

I don't have much to say about the Goalkeeping/GK Awareness rename because I haven't quite figured out all the new gen goalkeeper attributes yet.

Aggression looks like it's a defensive attribute (unlike the aggression of old), if I had to hazard a guess, it make function similarly to how Response did for defenders.

I haven't played pes in quite a while so I'm new to some of the attributes. I know that agility is gone now and it has been gone for a while, and from what I've read on this website agility seems to be based on different factors like explosive power, which is now acceleration, body control, and height and weight. I'm interested in knowing how can you tell how agile a player is going to be, when looking at all the different factors that effect agility? I'm interested in knowing when I play the game, how to tell if a player that I'm playing with is going to be agile with the ball, so I know if I can dribble to beat players well or twist and turn with the ball to keep possession.
Top Regarding the TC / Dribbling in PES2020: Has anybody conclusively worked this out now?

I would say that 'Tight Control' is close control (old DA) and takes 'tactical dribbling' into account - with 'Dribbling' stat being indicative of DS / 'R1 dribbling' ability...
Seems more logical that Konami rated the wingers / technical midfielder wrongly rather than that the stat in-game is wrong...

So eample of what it should be:

Modric - high TC, low Drib
“In football, everything is complicated by the presence of the opposite team.”
Top
Post Reply
22 posts

Return to “Attributes analysed and explained”