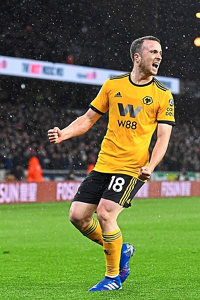 He is VERY fast off the ball. I even think he is faster than André Silva, but right now being equal to him seems perfectly deserved.

He has some assists (the last two to André Silva, with beauty passes (shorts and longs) and could even have a higher number of assists if his teammates could scored in all chances he created. He stills lacks in put some speed to those passes but he has clearly good precision, almost to Otávio's level

He showed up on recent matches that he has good precision shots, with booth foot, scored 3 goals against Nacional, plenty of opportunism and he is a player with good goal instinct. I think he deserve this value, beside the fact that the really good value for him would be a 78
Top

It is his DA what stands out more of him among his technical abilities; I'd rate it around mid-80s. He plays roughly like Vietto, but I bet Jota will be fairly better than Vietto in the mid and long term.
"Willy Wanda is Chinese!!!"
Top

So he's doing good? How good is he actually? Barely watched him play.

He's doing alright, formed a good partnership with André Silva. And he scored a hatrick one of these days

Read about the goals, spanish newspapers might be bad, but at least they cover football from all over Europe, unlike British press

but I wanted to know if it was just pure luck or he was actually performing well.

I never watched him play this season, kinda caught my eye on FM18 so I decided to look him up, he seems to be doing fine in Championship, 12 goals, 4 assists and some impressive performances for Wolves.
I never understood these young players with potential going away from home country to get paid in England while they are still very raw as players, really sad to see how many end up shitting the bed because they didnt get proper coaching in good conditions, hopefully he will not be one of those guys.
Top

his hat-trick today vs Leicester, first time a Wolves player makes a hat-trick on pl since 1977.

I've not touched this set since his arrival in england, I'd say might be better in some areas, and one or two stand out as looking to high as well like that header value
Top

Condition 6 is a wtf thing for me. So his hat trick game was a perfect embodiment of everything he is, because he squandered like 5 chances and was sloppy, yet kept making good runs and getting into good areas and finally executed and scored enough to get them the points. He is a pretty high intelligence player but is hit/miss on the technical execution
Top

What a great set this is, very accurate (at least IMO) props to you BigStu and whoever came up with the suggestions.
Top

Diogo jota today with his 3 goals vs Spanish, he has a great goalscorer instinct, he is always there, to revive balls, I think he deserves a stats rise
Top
Post Reply
13 posts • Page 1 of 1