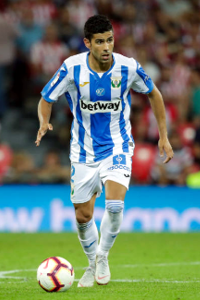 He is a very nice player.But after watching this video I suggest his Tech can go up by a point.

Hi!!! Juanfran has been signed by Betis (1º Spanish)

I like him. He's a limited player but unlike others (Rodríguez) he knows well what he can do and what he cannot. Juanfran also knows how to exploit his strenghts (speed and crossing, basically) and that makes him a very useful player for a team like Deportivo, it's been almost 10 years since they've had a right midfielder able to both outrun defenders and deliver accurate crosses).

In terms of Passing, his SPA is decent enough to merit high greens IMO, while his LPA is one of his main assets and I wouldn't go lower than 83. SPS however looks lacking and a low 70s value could be enough, meanwhile I'd go with 80 for LPS.

Both RES and TW could do fine with 75 or maybe even a bit lower.

Cards... I'd remove Mazing Run, unsure whether to keep Long Ranger or not, I'd delete it as well for the time being. Early Cross should be added anyway, Run Around as well. *Side is a must.

I'd love to read other opinions on him, I'd like to update him soon.

he moves to Watford from Betis after his Deportivo loan ended: http://www.realbetisbalompie.es/en/noti ... watford-fc
Top

Gave him a few minor tweaks. He's improved a bit in terms of defensive contribution, but still remains an one-dimensional player. I've downgraded several technical attributes (mostly SPA) and also ATT in an effort to represent this. 95% of the time he does the same (run down the sideline -> cross), although he links up nicely with other players when he has too, but his game as stated earlier is overall pretty simple, yet effective to a degree.